The BGS Keyworth based Wilding Group have been up and running for a few months now and over the course of a lunchtime each month we work on specific areas of our site to encourage wildlife and help increase biodiversity.

In the last 3 months, we have worked on the small woodland area by the Nicker Hill entrance where we planted spring bulbs, transplanted cowslips to encourage better growth, removed rubbish and created a path to a wildlife refuge (which also conveniently doubles up as a compost area for the grounds team). In the Hanlon House garden (Mary’s Garden) we have started to tackle the bramble, have cut back the encroaching hedge line (to reveal a beautiful corkscrew hazel), cleared and created rocky margins around the pond, created a level footpath from wood chip, and built a wildlife refuge (including a rather splendid ‘insect hotel’). 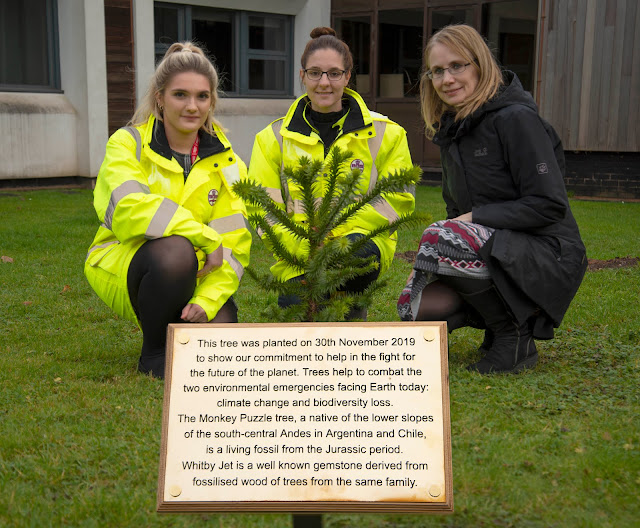 On 30th November the Woodland Trust have asked that we all plant a tree to help fight for the future of the planet. At BGS we have already been busy supporting this campaign. The grounds people have removed a dozen dead and dying trees and these will be replaced by native trees kindly donated by staff. The dying larch opposite the front entrance was in a poor state and this was removed and has been replaced by a Monkey Puzzle tree. The tree is small (!) but around 15 years old. We hope that now it is “out of its pot” it will grow much faster, although we anticipate growth of only a few centimetres per year. Monkey Puzzle trees (also known as Chilean Pines) are native to Chile and Argentina where it is in danger of extinction due to the logging industry. The ancient conifer first evolved around 200 million years ago and is described as a living fossil. Some of the best fossilised Monkey Puzzle tree wood can be found around Whitby in the early Jurassic (Toarcian) aged rocks. The fossil material is known as jet and is classified as a gemstone, used to make jewellery since prehistoric times and especially popular during Victorian times when Queen Victoria wore Whitby jet as part of her mourning dress.

A plaque has been placed by the Monkey Puzzle tree as part of the BGS’s pledge to do what we can to support the planet during our climate crisis.