The magnetic field of the Earth is changing slowly every day. This year, for the first time in 350 years in Great Britain, we’ll see the direction of magnetic north move from being west of grid north to east of grid north. Susan Macmillan of the Geomagnetism Team explains what’s happening and what’s in store for compass users in Great Britain over the next few years.


At the BGS we derive a model of the Earth’s magnetic field valid for the area of Great Britain using data collected at three magnetic observatories and a network of repeat stations. A new model is derived every year to keep accurate track of the slow changes in the Earth’s magnetic field. This model is used to calculate the angular difference between the directions of grid north and magnetic north, otherwise known as grid magnetic angle (GMA). The map shows how grid magnetic angle currently varies across the country, and also how it varies in time.


Grid magnetic angle and its estimated annual rate of change are shown on Ordnance Survey maps.  Because of the changes in 2014, the OS have had to design a new icon to show the new relationship of magnetic north compared to grid north.

What is causing this gradual change in direction of magnetic north in the UK? 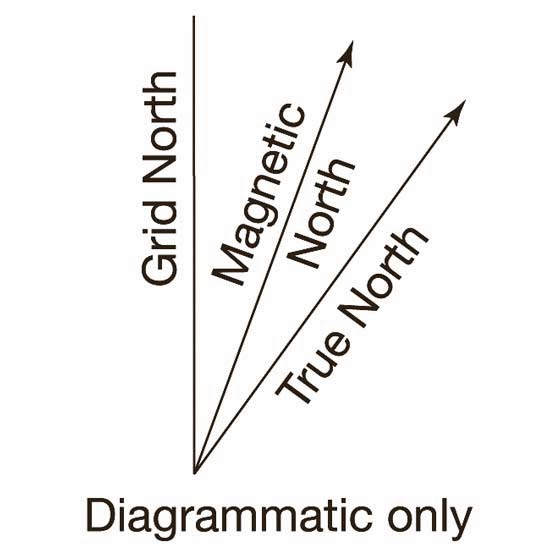 Now the difficult stuff. The Earth’s magnetic field is sustained by a dynamo process in the liquid outer core of the Earth. Interactions between the flow of the molten iron-rich material in this region and the magnetic field generate electrical current that, in turn, creates new magnetic energy which sustains the field. Energy sources for the fluid motions are primarily convection - as the Earth slowly cools down, warmer fluid rises and cooler fluid falls and solidifies onto the inner core. This in turn changes the chemical composition of the fluid, and buoyancy forces result. The rotation of the planet also contributes. This dynamo process also results in the movement of the magnetic north pole but because the Earth’s magnetic field is more complicated than dipolar magnetic compasses do not point directly to the magnetic north pole. Compass needles instead align themselves with the local magnetic field.

What does this mean for compass users in Great Britain?


A mnemonic that will work after the change is “East is least, west is best”. This mnemonic is applicable anywhere in the world, no matter whether magnetic north is west or east of grid north. The other nice thing about this mnemonic is that it is also applicable with any type of map with north lines. The north lines can be either grid north lines or true north lines as on mariners’ charts. “Least” in this context means “subtract” and “best” means “add”.

If you can come up with a better mnemonic that is applicable for all circumstances Susan Macmillan would like to hear from you!

Alastair Lings said…
When I was a navy cadet I was taught CADET, Compass>>>True ADd East. We had to take in to account the magnetic declination, and the deviation due to the ships magnetism which varied with direction.
6:56 pm, January 31, 2014

Trollockillsrand said…
How will this affect my Feng Shui? Will I need to reposition my bed?
7:51 pm, January 31, 2014

Gardendata said…
Mmmmm. Not sure how I got to this page - other than Google which normally gets me to where I want to go. It failed in this instance, so maybe it is not aware of your findings and observations!!! (But I rather enjoyed getting lost this once!,,) :-)
2:34 am, February 01, 2014

Ron said…
Fascinating. I bet the Mountain Rescue Teams will be busy for a while, until the old die-hard map and compass people adjust.
2:37 pm, February 01, 2014

dyvroeth said…
MR Lings is spot on. "Compass to True, Add East" - from my GCE O Level Navigation syllabus in 1974. Will OS and the Hydrographic Office be running a major set of reprints of maps and charts as a precaution ? What about a special NOTAM and NOTMAR to highlight the event ?
11:01 pm, February 01, 2014

BGS Geomagnetism said…
Thanks for your comments. CADET is a popular one but is strictly speaking only applicable for maps and charts where the north lines are true north lines and not grid north lines. And as one is normally going from "True" to "Compass", you have to remember to apply it in reverse, i.e. subtract easterly magnetic variation/declination. Perhaps additional information that is easy to forget in the heat of the moment. The lack of specificity of the type of north in "East is least, west is best" means that it is applicable for both types of maps.

I very much hope the Mountain Rescue Teams will not be busy on this account. Grid magnetic angle is quite small as we go through this transition.

Unknown said…
When the time arrives to have Easterly Declination, another mnemonic could be:
Map to Field = Get Rid
Field to Map = should Add

Unknown said…
So, actually for the hill walkers of the country what counts is if you have easterly or westerly grid magnetic angle and not easterly or westerly declination (east or west from true north, where true north coincides with the line of longitude 2oW). Meaning that if the magnetic north is west of grid north but still east of true north, we need to change the old mnemonics in order to navigate with map and compass.

BGS Geomagnetism said…
Hill-walkers are using maps with grid north lines so yes, what matters is whether grid magnetic angle, rather than declination, is easterly or westerly. Declination is important for mariners using sea charts, where the north lines are true north lines i.e. lines of equal longitude.

For topographic mapping in Great Britain using the transverse Mercator projection (the basis of the British National Grid), along 2 degree W longitude, true north and grid north are in the same direction. West of this, true north is east of grid north and east of this, true north is to the west of grid north. There's a useful, though rather detailed, document available from the Ordnance Survey at http://www.ordnancesurvey.co.uk/docs/support/guide-coordinate-systems-great-britain.pdf describing the coordinate systems in Great Britain and I find Figure 8 handy for visualizing the relationship between grid north and true north. The angle between grid north and true north is called grid convergence and, if you're really keen, can be computed using a spreadsheet available at http://www.ordnancesurvey.co.uk/business-and-government/help-and-support/navigation-technology/os-net/coordinate-spreadsheet.html.

Till now magnetic north has been west of both for the whole country but over the next few years will slowly become east of grid north and west of true north for the area west of 2 degrees W. After about 2018 and for the area east of 2 degrees W, magnetic north will slowly become east of true north but remain west of grid north for a while, and eventually for the whole country, will be east of both. But for hill-walkers using compasses it is the relationship between grid north and magnetic north that is important. True north can generally be ignored, unless doing very accurate night navigation using the pole star!