Our use of fire retardants: out of the frying pan into the environmental fire...by Christopher Vane

on January 23, 2019
Why do we use them: Most of us don’t know it but every day we come into contact with fire retardant chemicals via clothing, furniture, polyurethane foam, power cables, circuit boards as well as plastics in electronic devices such as televisions, tablets and building materials. The very screen you are viewing probably contains a range of brominated flame retardants (BFR) which have been added to capture free radicals and inhibit flame formation. In other words these are really useful compounds that make it difficult for your device to burn; in effect they buy us time in the event of a fire and save lives. More than 75 different BFR have been manufactured since the 1970s and their use has risen in parallel with our seemingly insatiable demand for complex yet miniaturised devices that are fire-safe.
Changing of the Guard: In the early 2000’s scientists found that some common BFR formulations were harmful to animal and human health. For example studies with rats and mice showed negative effects to pancreas (diabetes), nervous system, immune system and reproductive systems. As a result, these chemical formulations were prohibited within the European Union in 2004. A few years later BGS investigated the presence of these compounds in sediments from the Glasgow reaches of the River Clyde, Scotland. However, more recently additional restrictions on the manufacture and use of another BFR has followed, and it was listed in 2017 under Annex A of the Stockholm Convention which severely prohibits use due to environmental concerns. Consequently a variety of new so called novel brominated fire retardants (NBFR) have been developed and added to products in order to maintain fire safety but information on the environmental presence of these compounds was lacking. 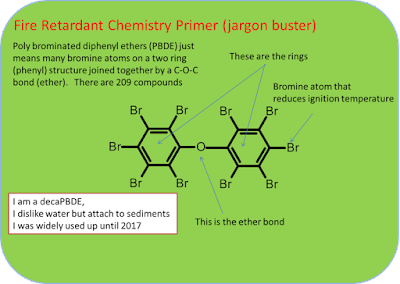 BFR Hunters:  A collaborative team comprised of scientists from University of Birmingham, School of Geography, Earth and Environmental Sciences as well as Thermo Fisher Scientific and BGS’s Organic Geochemistry laboratory used the very latest mass-spectrometer to identify both old and new brominated fire retardants in surface sediments of the River Thames (see here). Birmingham PhD student Aristide Ganci found the replacement BFR compounds were present at similar concentrations to the legacy equivalents and that their occurrence corresponds with proximity to London’s main sewage works and the docks at Tilbury. Close inspection of the geochemistry results have revealed the first ever UK occurrence of selected compounds in the environment. The implications of this are that the newer formulations of BFR are rapidly entering our urban rivers and because the chemicals do not easily decompose may serve as a useful chronological tracer.