On board the RRS James Clark Ross: ORCHESTRA part 3…by Melanie Leng

Melanie Leng is currently part taking in an expedition to the Southern Ocean as part of ORCHESTRA (Ocean Regulation of Climate by Heat and Carbon Sequestration and Transports), a NERC funded programme with partners at the British Antarctic Survey (lead), the National Oceanography Centre, Plymouth Marine Laboratory, and many more including BGS. This is the third blog about her trip where she updates us on her arrival on the RRS James Clark Ross… 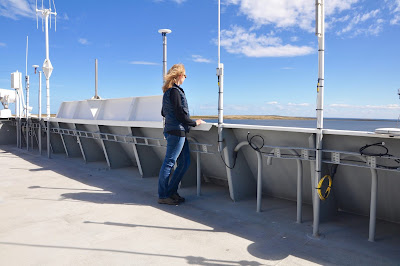 We arrived on the RRS James Clark Ross a couple of days ago to begin the mobilisation (ie organizing our equipment that we will be using to make measurements and take samples) before we set sail. The equipment has been organised over the summer by numerous science teams (to name a few: BAS, NOC, BGS, University of Exeter, University of Southampton) and loaded onto the ship while it was docked in Harwich. Hundreds of boxes from numerous science teams were stowed in the hold. We had to bring all the equipment up to the dedicated laboratories that we will need for sampling across the Drake Passage. Much equipment remains in the hold for subsequent cruises, following this one, before the ship heads back to the UK. The equipment in the labs has been securely strapped down as we are anticipating rough seas. For my isotope analysis, I will take bottles of ocean water for analysis back in the BGS laboratories. Others make measurements on the ship, as the analysis are either relatively easy or the samples will not preserve till we can get them back to our laboratories in the UK.

We are currently cruising south from the Falkland Islands and will be crossing the Drake Passage to the Antarctic Peninsula in a few days, repeating some measurements of ocean temperature, salinity, oxygen, and currents that have been made with support from NERC funding since the early 1990’s. We will also be adding new novel measurements, including O, C, N and Si isotopes and micro plastics to the arsenal of information we will be gathering to help us understand the changes in the ocean. 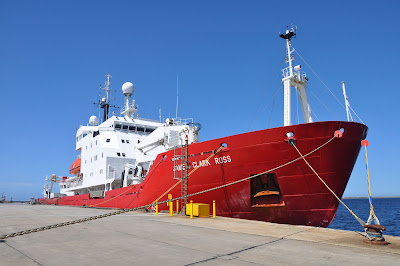 The samples I am collecting are for oxygen and carbon isotopes. The oxygen isotope data will tell us about how much freshwater to seawater there is at particular locations (which will help us understand melting of the Antarctic ice mass and therefore heat) and the carbon isotopes will tell us where the carbon is from and how the ocean uses the carbon. These measurements are particularly important to understand because of the significant changes the Earth is experiencing during the Anthropocene period we are living in.

While the scientist work we have a dedicated crew on board that support us, these are engineers, deck crew and stewards to name a few. The crew, often overlooked, have significant responsibilities which are integral to the successful operation of the ship and our research.

So far the weather has been good to us, blue skies and calm seas, hopefully it will continue!


I am tweeting @MelJLeng and @ORCHESTRAPROJ and Facebooking (Orchestra project) during this trip, as well as updating the BGS britgeopeople.blogspot.com and drakepassageblog.wordpress.com when I have time.
Melanie Leng is the Science Director for Geochemistry at the BGS and the BGS lead scientist for ORCHESTRA.
British Antarctic Survey climate change geochemistry isotopes Melanie Leng National Oceanography Centre ORCHESTRA Plymouth Marine Laboratory RRS James Clark Ross Southern Ocean