Do Shale Resources Have Any Place in a Green Great Britain?...by Joe Emmings 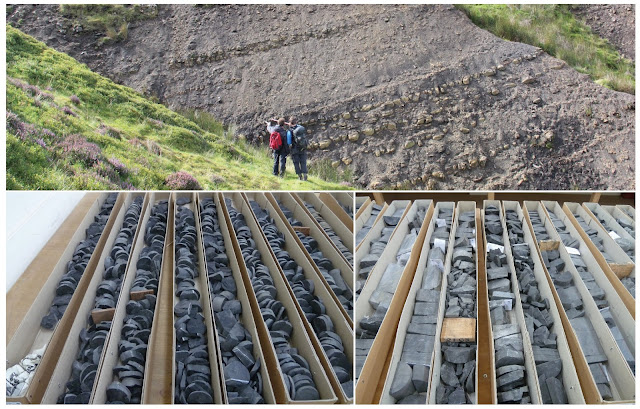 The world needs to efficiently phase-out its dependency on fossil fuels and bring in a balanced mix of sustainable energy sources, such as wind and solar renewables, and probably nuclear power. In the UK governments’ 2017 Clean Growth Strategy, three long-term technological ‘pathways’ were predicted in order to help us reduce greenhouse gas emissions by 80% by 2050. In reality, we will need to utilise a mix of these options. Pathway one, the ‘electricity pathway’, represents a straightforward replacement of fossil fuels used in electricity generation, household heating and industry, with renewables and nuclear power. This route is attractive because it potentially represents the most efficient and fastest way of substantially reducing emissions. However, a problem with this route is that natural gas is embedded in the design of our power plants, electricity distribution, heating and transport infrastructure. Electrification of this infrastructure will be expensive, but nonetheless perhaps offers the best way to reduce emissions, at least from a national perspective.

The second option, the ‘hydrogen pathway’, utilises hydrogen for heating of homes and buildings, and as fuel for vehicles and in industry. Rather than replace our gas infrastructure, it is instead modified so that it can be used for hydrogen rather than hydrocarbons (e.g., natural gas). Hydrogen gas can be generated from water, biomass, natural gas or following coal gasification. Steam reforming of natural gas coupled with carbon-capture and storage (CCS) is a promising way to reduce emissions whilst, to some degree, avoiding the costly process of replacing our existing infrastructure. Given fossil fuels are not being replaced with renewables at the required speed globally, particularly in some developing countries, this pathway is perhaps a pragmatic and outward-facing approach to reducing global emissions. Substantial ‘inertia’ in the global fossil-fuel energy sector could mean coal and natural gas are utilised as a significant source of power generation for longer than expected.

The third option, the ‘emissions removal’ pathway, utilises biomass power stations coupled to CCS in order to remove CO2 from the atmosphere and store this in geological reservoirs. This route is possibly the only means which global emission reduction targets can be met, but is problematic because it will stress resources such as arable land, fertilisers, water and ecosystems.

So, do shale resources have a place in Green Great Britain? In order to completely switch to renewables and nuclear power (‘electricity pathway’), by definition, shale gas cannot have a long-term future in UK or globally. That said, locally extracted natural gas is potentially a short to medium-term ‘bridge’ between coal, oil and gas and sustainable sources of energy. In a global context, locally extracted gas is potentially preferable over imported gas, because in the UK we have strict regulations which protect the environment, and the fugitive emissions by long gas pipelines crossing parts of Europe is significant.

A key part of my research focusses not only on the hydrocarbon (oil and gas) prospectivity UK shale, but also understanding the broader resource potential of shales. UK black shales can contain high concentrations of metals (‘metalliferous’), which might be mined or even co-extracted during hydraulic fracturing or during remediation of waste water. The problem is no two shales are the same; the amount of gas and metals present in the rock varies substantially. This ultimately comes down to the environment of deposition – in other words – what did the environment look like millions of years ago?

We know Mississippian black shales in the UK were deposited in shallow seaways. By studying the geochemical composition of UK black shales, we know these marine settings lacked oxygen (termed ‘anoxic’), an environment that is similar to the modern Black Sea. Understanding when and how seawaters became oxygenated is important for understanding the resource potential of shale. The geochemical proxy record shows that seawaters were rich in hydrogen sulphide (H2S), a gas that is highly toxic to aerobic organisms. H2S is produced when other ‘electron acceptors’, such as oxygen, are absent. Anaerobes that live in the water instead respire using dissolved sulphate (SO4) and produce H2S as a product. This means UK black shales contain lots of pyrite (FeS2, ‘fools gold’) and are enriched in many ‘redox-sensitive’ metals, including Co and Ni. The required expansion of renewables and batteries used to store electricity (‘electricity pathway’) is increasing the demand for metals, such as Co and Ni. Steam reformation of natural gas, used to produce hydrogen as part of the ‘hydrogen pathway’, also requires metals as catalysts. So in this respect, shale resources, as gas or metals, might have a part to play in becoming Green Great Britain.

Joe Emmings is a Post-Doctoral Research Associate in Geochemistry at the British Geological Survey’s Stable Isotope Facility and Centre for Environmental Geochemistry. Please contact Joe if you are interested in his research field.