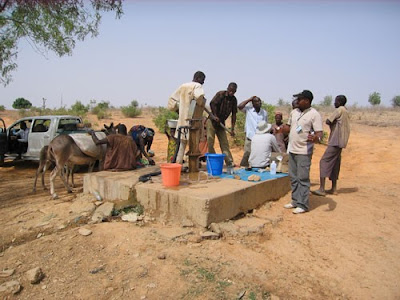 Part of what I call the ‘geology – energy – climate nexus’, the intimate relationship between geoscience, energy supply and climate change, concerns groundwater and its importance to climate change adaptation. The question is: just how important will groundwater be in helping people to adapt to climate change? The answer is likely to contain a lot of geology.


A recent World Bank report  states that the impacts of climate change will be channelled primarily through the water cycle in that systems of food, energy, and urban and rural life will mainly feel the effects of climate change through water. In many parts of the world, groundwater is the chief source of water for domestic, agricultural and industrial use. It also has a crucial role in providing a natural buffer against seasonal variability – and will likely be important to adapt to climate variability.

Many countries, abstract water from aquifers. Around 96% of global available freshwater resides in aquifers. About 70% of drinking water in the European Union, 80% of rural water supply in sub-Saharan Africa and 60% of agricultural irrigation in India depend on groundwater. Many countries, therefore, have large groundwater-dependent economies. Groundwater also provides baseflow to many rivers and sustains ecosystems by supporting wetlands and other aquatic ecosystems.

A few assertions can be made about the effects of climate change on groundwater. It is likely that recharge patterns will change. (Recharge is the process of water entering an aquifer mainly from the surface of the Earth). There is also likely to be increased demand, especially from irrigation, which today takes 70% of global groundwater withdrawals. Groundwater resources are most likely to reduce in areas of long term declining precipitation, but new research suggests that increasing intensity of rainfall with climate change may actually increase rates of groundwater recharge. Climate change may affect the quality of water in aquifers: with increasing temperature, groundwater salinity may increase as more water evaporates before it can reach deeper levels. Rising sea levels will also force seawater inland, changing recharge patterns.


Groundwater’s role in cushioning against climate change is perhaps most important in Africa. In Africa as a whole, groundwater is the major source of drinking water and its use for irrigation is forecast to increase as Africa’s economy and population grow. Despite its importance, there is a dearth of detailed local quantitative information on groundwater in Africa. A compilation of data by BGS’ Alan MacDonald and colleagues allowed continent-wide estimates of the amount of groundwater and potential borehole yields resulting in a figure for total groundwater storage in Africa of 0.66 million cubic kilometres . Not all of this groundwater would be available from wells, but this figure of two-thirds of a cubic kilometre is one hundred times larger than some estimates of annual renewable freshwater resources in Africa. This groundwater resource is not evenly distributed: most is present in north Africa (Libya, Algeria, Egypt and Sudan). The same study indicates that in many areas, well sited and constructed boreholes could yield useful amounts of water for low intensity rural activities and the aquifers they penetrate will have enough water to sustain abstraction through seasonal variations. 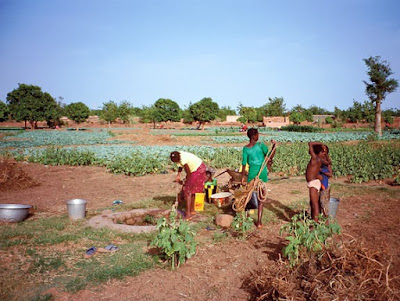 For industry and irrigation, the potential for higher yielding boreholes, for example those that could deliver more than 5 litres per second, is much more limited. With climate change and population increase this is likely to pose a problem.

In East Africa alone, population is forecast to grow from about 300 million today to 800 million by 2060 and 1150 million by 2090. Many of the countries in East Africa are already water stressed based on per capita annual water availability, but by 2100 this will increase to nearly all. A review by a team lead by Umesh Adhikari of the effect of climate change on runoff , shows huge uncertainty in studies of river catchments. An example is the upper Nile catchment which is predicted to have a change by 2075 of between 25% less, or 32% more, runoff. Clearly a prediction involving less runoff has serious implications for the population that depend on water. How much of the deficit can be compensated for by, for example, groundwater? Are the aquifers large enough in the area and will water wells deliver the deficit? Much of the research needed to answer these questions locally has still to be done. This is an example of how climate change adaptation can come down to very geological questions.

Saline groundwater is not just a direct problem for domestic water and irrigation. Soils can also be affected. In Bangladesh, for example, increase in soil salinity may lead to decline in yield of staple crops like rice and reduce the income of farmers significantly.

There are few detailed local answers to the many questions about run off, inland groundwater and coastal groundwater. The detailed study, when it comes, should be directed where population will likely concentrate in the future. In the rapidly changing continent of Africa, this needs an understanding of the way that large-scale development might occur, which in turn relates to the distribution of resources and already-established infrastructure.


One way to look at this could be through studying areas where future infrastructure development and population growth will take place. What will East Africa look like in 2060 or 2090? Where will the new people, the new industries, the new towns and cities be?

A good guide might be the pattern of potential resources like land, water and minerals, as well as existing infrastructure and transport routes. These items are linked into arcs or strips of land known as development corridors. It is in these development corridors where Integrated water resource management (and other environmental management) will be most critically needed.

It is worth looking at a couple of development corridors in Africa to illustrate the point. The so called ‘Northern Corridor’ already links the land locked countries of Uganda, Rwanda and Burundi with Kenya’s port of Mombasa. The Northern Corridor could, with more development, serve the eastern part of the Democratic Republic of Congo, Southern Sudan and northern Tanzania. The Nacala Corridor to the south, is less developed. There is considerable governmental and commercial interest because its future purpose would be to unlock the development potential of the hinterland of the Nacala Port and less economically developed parts of Mozambique, Malawi and Zambia. New resources will be accessible economically and the development of business and commerce will contribute to the reduction of poverty. But the environment – including groundwater – will have to be managed. The likelihood is that the pattern of development corridors either planned or already in existence is a good guide to the concentration of population and industry which is the key to understanding the food – water – energy nexus, and the geological aspects of the nexus, whether it be well managed groundwater inland or at the coast.

So it’s clear that long term geological studies will be important in understanding the potential for groundwater as a mitigation for reduced surface water, in the developing – and developed – world. It will mean geological mapping and modelling and the kind of long term concerted effort that only geological surveys can supply.

If you are interested in the wider geology – energy – climate nexus, read my new book, available from Elsevier, Amazon and (shortly) online through Elsevier’s ScienceDirect.

Prof Mike Stephenson is the Director of Science and Technology at BGS.