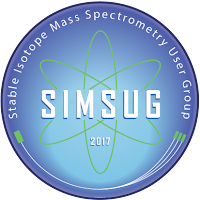 In July, the 14th Stable Isotope Mass Spectrometry User Group (SIMSUG) meeting was hosted by the Stable Isotope Facility at the British Geological Survey. SIMSUG brings together scientific users, engineers, manufacturers, and suppliers of mass spectrometry equipment to discuss new applications and developments in stable isotope research and analytical instrumentation. Although the meeting has been held annually in the past, the last SIMSUG was hosted six years ago in 2011 by Lancaster University Centre for Ecology and Hydrology – so about time for a catch up!

Over 80 delegates attended this year’s meeting representing many disciplines and affiliations, including UK- and EU-based universities, research institutes, academic journals, and mass spectrometry companies. The meeting kicked-off with a tour of the BGS, including the geological walkway and core stores, and the stable isotope, geochronology, inorganic and organic geochemistry facilities, highlighting the broad range of geoscience, health, and environmental research undertaken at the BGS.
﻿
The meeting programme was diverse, with scientific talks and posters organised into overarching themes covering methodological advances and systems innovation, tracing terrestrial and marine palaeoenvironmental change, and palaeodietary studies. Dr Peter Wynn (Lancaster University) gave a keynote presentation discussing the relevance of subglacial methane generation in a warming world, and Dr Tamsin O’Connell (University of Cambridge) described the contribution isotope analyses have made to palaeodietary studies and the potential for future developments.

A conference dinner was held at the National Justice Museum where delegates were able to enjoy an informative and interactive tour of Nottingham’s historic courthouse and jail. Dinner was followed by a guided walk through the city.

Congratulations to all PhD students who won prizes. The quality of the presentations and posters was very high indeed and all student presenters received commendation from the judges, Peter and Tamsin. The award for best overall presenter went to Benjamin Bell (University of Manchester), best talk to Hal Bradbury (University of Cambridge), and best poster to Kim Wood (SUERC). Well done everyone!

Thanks to our sponsors (Thermo Fisher, Elementar, Sercon, Elemtex, Isoanalytical, Goss Scientific, Elemental Microanalysis, QRA) and to the rest of the Stable Isotope Facility organising team. Catch up with #SIMSUG2017 on Twitter!

We hope to see everyone again at SIMSUG 2019, which will be hosted by the Life Sciences Mass Spectrometry Facility at the University of Bristol.