A month with the BGS Volcanology Team…by Alastair Hodgetts 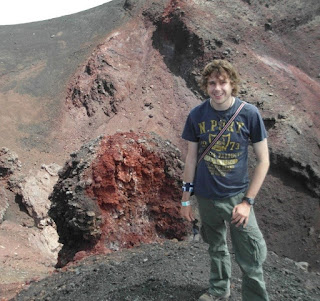 Hi, I’m Alastair, a graduate Geologist with a BSc (Hons) in Geology from the University of Leicester. I am about to study for an MSc at Lancaster University in Volcanology and Geological Hazards this upcoming academic year. I was offered an internship role in the British Geological Survey’s Volcanology Team, based in Edinburgh for the month of August 2016.
Throughout my time at BGS I was very lucky to be involved in some fascinating and exciting projects. Many of the projects I contributed to involved writing reports and compiling databases, as well as analysing data and conducting research. Most of this work will be used to advise the UK and overseas governments as well as inform and help observatories and other geological surveys that monitor volcanoes and record their hazards and impacts on a regional and worldwide scale. The work involved research along the whole spectrum of Volcanology, from the physical processes that trigger eruptions, and the parameters that control them, to applied volcanology - studying the hazards, risk and impacts on populations, aviation and infrastructure. Below are some highlights from my time at BGS:

As part of an ongoing project assessing potential volcanic hazards on Ascension Island, I was heavily involved in calculating and modelling the potential of re-suspended ash as a volcanic hazard on Ascension (a UK Overseas Territory). Volcanic ash can lie present on and around eruption sites for days, weeks or years, depending on the size of the eruption and volume of extruded ash and tephra. ‘Clean-up’ operations can be disrupted by the entrainment of volcanic ash and can take people and officials by surprise. It is often overlooked as a volcanic hazard as the volcanic activity has ceased. Models considered a number of parameters for ash to be re-suspended and re-entrained into the atmosphere, ultimately posing a threat to public health, infrastructure and aviation. I also plotted wind direction data on rose diagrams to determine the areas of the island that would most likely be affected by re-suspended ash (if the issue were to ever arise on Ascension Island…)

While I was working with the Volcanology team, Brava volcano in Cape Verde showed signs of increased seismic unrest.  Brava Island is a little known volcanic island with a population of ~7,000 people.  The seismic unrest in July and August 2016 highlighted that data and geological information needed to be collected to help prepare for a future volcanic eruption, if one were to occur. I spent a day researching and writing a literature review on the background geology and demographic statistics of the Cape Verde Islands, particularly focussing on the island of Brava.

I compiled an extensive database on the eruptive parameters of Mt. Sinabung in Indonesia since it’s almost continuous eruption starting in 2010, after lying dormant for ~400 years. With the exception of three eruptive hiatus’, (the longest lasting little under three years), it has remained in an unrestful and eruptive state, continuing to extrude large volumes of volcanic ash, tephra and lava and induce pyroclastic density currents, lahars and many other hazardous flows.  This involved me studying weekly reports from multiple sources from the past 6 years. I then extracted geological (plume height, shape and colour; ash dispersal distance and direction; lava dome growth; deformation etc.) and volcanic impact (alert level changes, geographic areas impacted, evacuation status etc.) data from the reports and compiled a database.  From this, I wrote a report to compare a number of eruptive parameters to see if a correlation between the data sets exists. The information, graphs and database will be used for a detailed report and publication on the eruptive source parameters of Mt. Sinabung.

My internship at BGS was very exciting and interesting with a strong focus on applied work for government, industry and civil protection. It has been very rewarding to work for a world-leading geoscience organisation that addresses current issues, hazards and risks and uses geological science to improve the lives of the British and international public. The internship with the Volcanology team has confirmed I have made the right decision to specialise in volcanology and I aim to work as a Volcanologist after my academic studies.