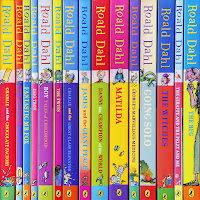 Today we're celebrating 100 years since the birth of Roald Dahl, one of the world's best known authors and one that fired the imaginations of generations of children. Many of his stories took inspiration from places that he had lived in or visited, often exquisitely described, transporting the reader to far off and distant lands or simply making them feel that they were in the story themselves. We've taken a look at the landscapes that played a part in his life, or appear in Roald Dahl's literary works, many of which have since been on the silver screen.

Roald Dahl was born on 13th September 1916 in Llandaff, Cardiff and wrote about his early years in his book 'Boy: Tales of Childhood' including the story of the mouse in the gobstopper jar. He is commemorated in the newly redeveloped Roald Dahl Plass, a public space in Cardiff that is home to the Welsh Assembly Building. Originally a dock, this was once a thriving coal port exporting millions of tons of coal mined from the Valleys of South Wales. The space was formerly known as the Oval Basin and many of the original building stones can still be seen and have been reused. For example, Pennant Stone, an Upper Carboniferous sandstone found within the Warwickshire Group, also from the South Wales Coalfield, and a common building stone in the South Wales and Bristol areas.

A regular holiday destination for the Dahl family, Roald spent many holidays here as a child, exploring the rocky coastline and fuelling his lust for adventure. Part of the Pembrokeshire Coast National Park, the coastline at Tenby is predominately limestone from the Lower Carboniferous period and part of the Pembroke Limestone Group. Once of the many characteristics of limestone is that it is particularly susceptible to chemical weathering, giving it a characteristic craggy appearance and the ideal location for searching in rock pools!

Roald Dahl's parents were both from Norway and for at least the first few years of this life, the only language spoken in their household was Norwegian. After the death of his father in 1922, this all changed, but the Dahl family continued to spend summer holidays in Norway. These holidays inspired the setting for the first part of 'The Witches' and the landscapes around the Oslofjord were described in the story as where many of the children went missing in mysterious circumstances. Despite the name, Oslofjord is not a fjord in the geological sense, a name reserved for a long, narrow, flooded inlet, carved by glacial erosion. Instead, Oslofjord uses the Norwegian word fjord in its literal sense meaning sea inlet. In actual fact, the Oslofjord is a rift valley formed as crustal extension formed a long linear lowland with higher ground on either side.

Great Missenden was where Road Dahl lived for the last 36 years of his life and many features of the village and surrounding area featured in his books. Located in the Chilterns, the entire area is underlain by Upper Cretaceous chalk, part of the White Chalk Subgroup. This has led to the formation of a number of landscape features including natural springs, one of which has given its name to Angling Spring Wood, an ancient woodland just outside Great Missenden. It is this forest that was not only the setting for Hazell's Wood in 'Danny the Champion of the World', but one of the trees (known as the Witching Tree) inspired the story of 'Mr Fantastic Fox'.

'The Witches' is perhaps one of Roald Dahl's darkest children's book and in one section the main character of the book stumbles across a Witches convention at a seaside hotel. The Headland Hotel in Newquay in Cornwall was used in the film version and due to its imposing position atop the cliffs overlooking Fistral Bay it is not hard to see why it was chosen. The cliffs themselves are Devonian sandstone, part of the Meadfoot Group and the stark contrast between the grey sky, the red brick building and the grey sandstone has made the location for this grand hotel appear nothing short of sinister.

The most recent addition to the list, the Old Man of Hoy is a 137m sea stack on Orkney and was used in the film adaptation of the BFG this summer quite literally as a 'stepping stone' as the BFG travelled home to Giant Country. The stack is made up of Late Devonian sandstone sitting on top of a plinth of volcanic rocks of a similar age. It is separated from the main cliffs by about 60m, although due to the dynamic coastal nature of its location it is not expected to stay that way for long. In the 1750s paintings show the Old Man of Hoy as a headland, and then in 1820s it was once again painted but this time as an arch and a stack, giving rise to the name of an Old Man as it looked like two legs. Since then one of the legs has been removed by stormy seas so all that is remaining is the other leg!

This one is a bit of a wild card, but Roald Dahl didn't just write children's stories, he also wrote short stories for adults as well as screenplays for many famous movies. One such movie was the 1967 James Bond film 'You Only Live Twice'. Mount Kirishima in Kyushu, Japan was the filming location for the exterior shots of one the most famous bad guy hideouts of all time, the Blofeld volcano lair, complete with a retractable 'crater lake' opening. The real Mount Kirishima is a group of active volcanoes and described as one of Japan's most active volcanoes, with the last notable eruption being in 2011. Despite the physical impossibilities of having an evil lair inside an active volcano, you have to admire Roald Dahl for his choice of location, one that went on to inspire many other movie and TV writers.