A study into the chromium content of the dust on leaves...by Lee Evans 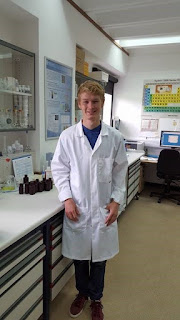 Hi, my name is Lee and I am a sandwich student from the University of Surrey just starting my placement year here at BGS working in the Inorganic Geochemistry team under the supervision of Elliott Hamilton. I will be helping out around the lab, specifically working on the multi-elemental ICP-MS instrument with Elliott and hopefully operating this on my own before Christmas. I will be completing a research project which will lead to a presentation and poster ceremony in October 2017 for Industry Day during the final year of my Chemistry degree to showcase my achievements during my time here.

My work will follow on from my predecessor, Emily Leeder, who has recently completed a report focusing on iron intake from dust deposits on pumpkin leaves, which are a staple part of many African’s diets. This was following up from Michael Watts and Elliott Hamilton’s “The Future is Africa” project; where they visited both Zimbabwe and Zambia in January and November 2014.

Two billion people worldwide suffer from iron-deficiency, often due to consuming various types of iron which cannot be absorbed. In some developing countries, extrinsic iron can contribute to dietary iron from contaminants such as soil or dust. Emily’s project featured different types of applications of dust, as a paste to mimic wet conditions and also when dry and blown onto the leaves. The leaves were ground for 15 minutes and microwave digested before being analysed using the ICP-MS.

She concluded that even after washing thoroughly, a significant proportion of dust remained on the leaf, from which the iron content of the leaves coated in dust increased from the control (no dust applied) which had an iron concentration of 60 mg/kg. However, when a paste was used to replicate a soil splash the iron content rose significantly greater to almost 50 times the control. The underside of the leaves were found to be the most susceptible to absorbing the dust, due to the hook-like stomata present.

So far, I have been assisting where I can in the labs; from sample dilutions for the ICP-MS to analysing elephant toenails for an on-going project (link to previous blog). A multitude of different tests are carried out in the lab each day, often leading to new and interesting techniques. I have also begun to familiarise myself with a variety of literature, focusing on identifying the different species of chromium, both Cr(III), an essential nutrient, and Cr(VI) which is toxic and a known carcinogen. I will be conducting a glasshouse study, similar to Emily’s, analysing the different quantities of both chromium ions present after the application of dust to coincide with ongoing field experiments in proximity to mine tailings in the Zambian copperbelt (Elliott Hamilton’s blog).

I’m looking forward to making the most of my time here at BGS, hopefully utilising the facilities and experts to develop both my own scientific ability and also helping the team to the best of my ability.