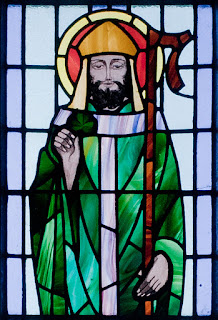 St Patrick's Day is celebrated the world over, and usually involves turning things green and drinking excessive amounts of alcohol. But what do we know about the great man himself and why do we celebrate? Most people know that he was Irish (he wasn't), that he drove the snakes out of Ireland (he didn't because they were never there in the first place), and that he converted Ireland to Christianity (we don't even know whether this is true as it was probably already done).

Now that all the myths have been de-bunked, what do we actually know about St Patrick? The truth is that we don't know a huge amount about him. We know that he lived during the 5th century and that he originated in Roman Britain, but aside from that a lot of what we know is pure speculation. So how come he is celebrated so widely? Despite our lack of knowledge, there are a huge number of locations across the UK and Ireland that all claim to have links to St Patrick. It is unlikely that he actually visited them all but more of an invention by clerics in Medieval Ireland to increase pilgrimage visits. Pilgrimage was big business in Medieval times, bringing in visitors from across the Christian world, and the idea seems to have stuck.

Many of the sites associated with St Patrick were simply iconic landscape features formed as a direct result of the underlying geology. We've put together a list of some of the better known locations linked to the famous Saint but also added in a few that are slightly off the beaten track.

1. Ravensglass, Cumbria
There are a number of places that claim to have been the birthplace of St Patrick, Ravensglass in Cumbria is just one of them. Located on the edge of the Lake District National Park, Ravensglass is thought to have been an important Roman naval base in the 2nd century. It is famous for the export of hematite from nearby Eskdale that has been mined there since Roman times, and more recently for the export of granite and copper ore.

2. Old Kilpatrick, Dumbartonshire
Another place claiming to be the birthplace of St Patrick is Kilpatrick in Dumbartonshire. The name means 'Church of Patrick' so at least the name is fitting if nothing else. A great deal of the geology of the surrounding Kilpatrick Hills is made up of Carboniferous lavas, with two zeolite minerals; edingtonite and thomsonite being first recorded here.

3. Slemish Mountain, Co Antrim
St Patrick is thought to have been kidnapped by Irish pirates when he was about 16 and brought to the east coast of the island of Ireland. He was put to work as a shepherd on the slopes of Slemish Mountain, an iconic volcanic plug formed during the Palaeogene period. It's dolerite core stands proud from the landscape in stark contrast to the the surrounding low lying basalt. It is said that it was whilst working on the slopes of Slemish that St Patrick discovered Christianity and made his plans to escape home.

4. Llanbadrig, Anglesey
On his return to Britain, St Patrick is said to have been shipwrecked on Middle Mouse Island, just off the coast of Anglesey. He made it ashore and took refuge in a cave on the cliff with a plentiful supply of fresh water. The rocks of the cliff are Precambrian limestone making it the ideal geology for caves and natural springs. The limestones themselves contain fossil stromatolites (algal structures) and have been dated to between 650 and 700 million years ago, making this one of the few locations in the UK and Ireland to see Precambrian fossils. After recovering from his ordeal, St Patrick founded a church at the top of the cliff that can still be seen today and the name Llanbadrig translates from the Welsh as 'Church of Patrick'.

5. Saul, Co Down
St Patrick decided to return to Ireland to carry out his missionary work and convert the population to Christianity (see note above). He was planning to return to Slemish, but strong currents swept his boat through the Strangford Lough tidal narrows and he landed near to Saul in Co Down. Strangford Lough has an extremely fast tidal flow due to the narrow entrance to the sea lough form the Irish Sea. Strangford Lough is underlain by a geological fault, that combined with the erosive power of ice during the last glaciation has given rise to this narrow sea lough. Whilst St Patrick may have wanted to go to Co Antrim, it was as a direct result of the geology that he ended up in Saul, Co Down where he is thought to have established the first church in Ireland.

6. Rock of Cashel, Co Tipperary
Probably one of Ireland's best known tourist attractions, the Rock of Cashel is said to have been visited by St Patrick where he met and baptised the powerful King of Munster, Aonghus. The 'Rock' itself is Carboniferous limestone and is one of the many distinctive features in this lowland karst area.

7. Croagh Patrick, Co Mayo
As it's name would suggest, Croagh Patrick is linked with the famous Saint. He is said to have visited in 441 when he fasted for 40 days and 40 nights. It is still a location for pilgrims to visit on Reek Sunday (the last Sunday in July). Croagh Patrick is made up of deformed quartzites that formed during Ordovician times, something that makes the pilgrimage even more of a challenge than just the 764m climb.

8. St Patrick's Holy Well, Belcoo, Co Fermanagh
One of over 3000 holy wells on the island of Ireland, St Patrick's holy well near Belcoo is said to have been blessed by St Patrick and water from the well was thought to cure 'stomach and nervous complaints'. The limestone geology of the region makes this one of several natural springs in the area some of which are also associated with local legends similar to this one.

9. Station Island, Lough Derg, Co Donegal
Lough Derg in Co Donegal, was and still is an important place for those wishing to celebrate St Patrick. It is on a small island in the middle of the lough that St Patrick as supposed to have seen the entrance to purgatory. To most geologists however, the name of Lough Derg is synonymous with a major thrust fault in the north west of Ireland called the Lough Derg Slide.

10. Downpatrick, Co Down
St Patrick's final resting place is thought to be on the Hill of Down in Downpatrick Co Down. No-one knows for sure whether this is the case or not but the location of his suggested grave is marked with a large piece of granite from the nearby Mourne Mountains. The Hill of Down is on an elevated position and is where the cathedral is also built. It is actually a drumlin that overlooks the Quoile River below and is one of many that are found in the area.

This is a fitting end to our geological tour as the day we celebrate St Patrick's Day, 17th March, is thought to have been the day he died sometime during the 5th century. Irrespective of what he did or didn't do, let's raise a glass to the man himself because if nothing else, he has helped to make famous some of our most iconic geological sites.