on October 05, 2015
Jonathan Dean from the Stable Isotope Lab at the British Geological Survey has just returned from a lake drilling training course in the Republic of Macedonia. Here he discusses what he learnt.

The International Continental Drilling Program (ICDP) is an organisation that gives scientists money and technical support to allow them to drill deep holes in the Earth to retrieve sediment and rock. These projects aim to answer key questions about the Earth, such as how earthquakes occur, how mountains form and how the climate changed in the past. UK scientists have been involved in many of these big drilling projects over the last few years. For example, I'm currently investigating half a kilometre of tubes of lake sediment that were drilled in Ethiopia, as described in a previous blog post. We think these sediments extend back to over half a million years ago. By looking at how the chemical composition of the sediments varied between different points in the past, we're reconstructing how climate changed through time. Our aim is to understand what the natural drivers of climate change are and whether or not climate change could explain why our species decided to migrate out of Ethiopia from around 100,000 years ago onwards to populate the rest of the world.

Every year, ICDP organise a training course for scientists, and this year I was one of 20 people from 5 continents to be lucky enough to attend. We were based on the shores of Lake Ohrid in the Republic of Macedonia, where another drilling project funded by the ICDP was carried out in 2013. It is one of the oldest lakes in the world, probably existing for well over one million years, and has many species that are not found anywhere else on Earth. As Jack Lacey described previously, they drilled down 569 metres below the lake bed. The sediments are being analysed in Germany and the UK, including in the Stable Isotope Lab at the BGS.

For the training course, we started by driving to another lake, Prespa, in the middle of which is the tripoint border between Macedonia, Greece and Albania. German scientists were undertaking another drilling campaign, and were able to see lake sediment coring in action. We also drove around on a boat setting off explosions in the water behind us, and the way these sound waves bounced off the lake bed was recorded by devices carried by the boat. This technique is used to find where the most undisturbed sediments are on the lake bed – the best place from which to drill sediment cores.

The following two days were comprised of lectures and discussions with the scientists who worked on the Lake Ohrid project about the practicalities of taking many hundreds of metres of sediment cores in a lake that has waters nearly 300 metres deep. There were some interesting talks on the analyses being undertaken on the sediments from Ohrid. We also learnt a lot about the process of developing deep drilling projects and writing the funding applications. Such large, multi-million pound projects require an experienced, international team and lots of logistical and scientific planning if they are to be successfully funded and then carried out. 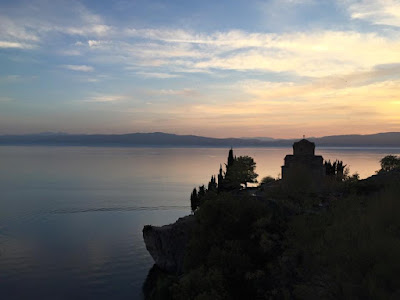 The training course was really useful – it improved my understanding of the process of drilling lake sediments and gave me a better appreciation of how to manage the analysis of the sediments after the fieldwork has ended. I would thoroughly recommend people applying for next year’s course!