on November 06, 2014
Have you seen our educational 'Climate through Time' poster? You can pick it up from any of our shops or download it free from the website... it's a staple resource that we get a lot of nice praise for. In fact, Elizabeth Devon from the Earth Science Education Unit at Keele University got in touch to tell us just how useful she finds it, to save you from seeing our blushes she wrote it all down in a nice post...

These are just a few of the many comments heard when people of all ages are presented with the 'Climate through Time' poster. Mostly, I give them out to science teachers and teacher-trainees when I am presenting the Earth Science Education Unit (ESEU) Continuing Professional Development (CPD) sessions. I always spend some time at the end of these workshops explaining the poster and suggesting ways of using it. 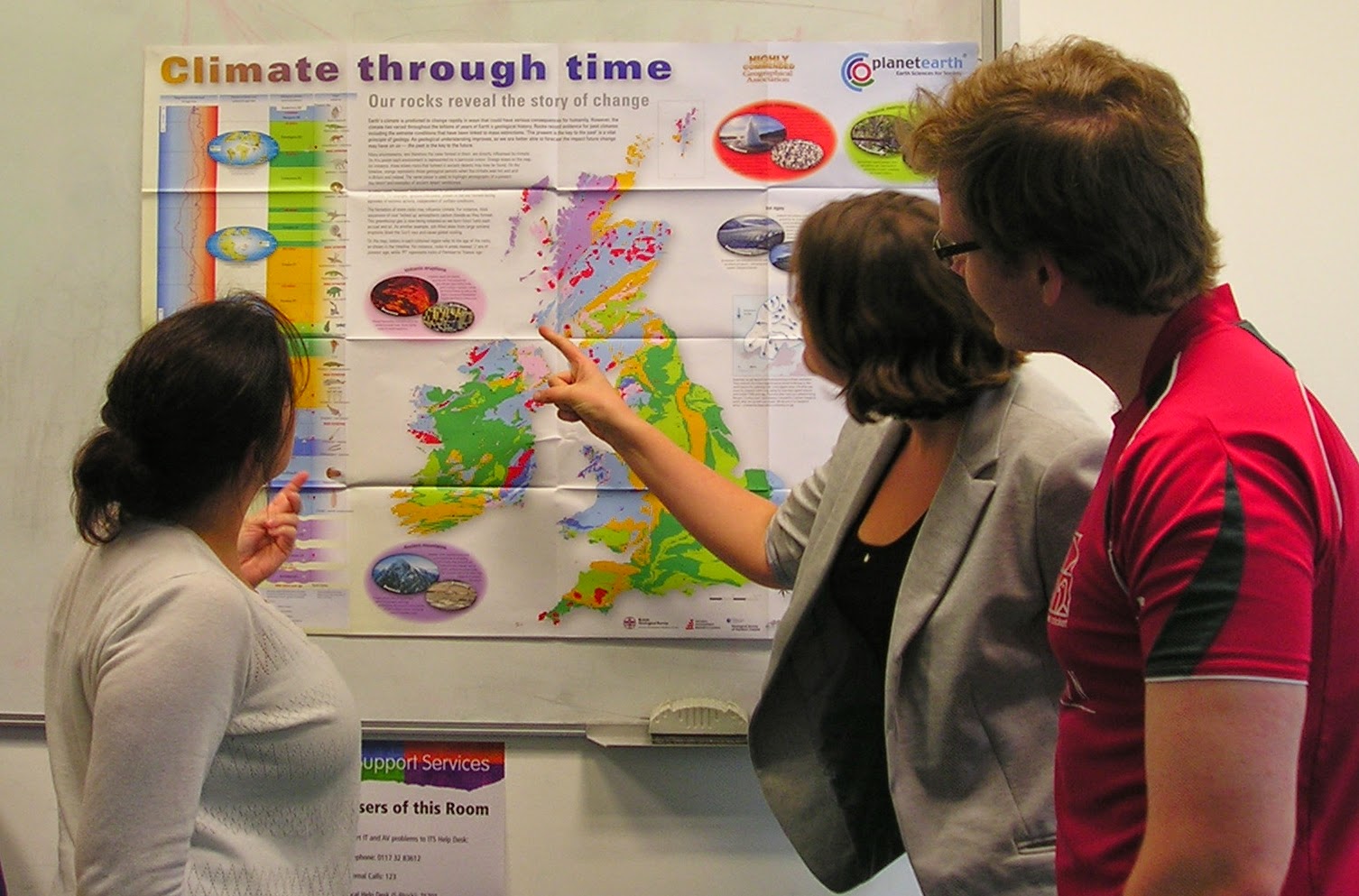 I have also used it in schools with ages from 8 to 18. I spread as many maps as the tables will allow around the room and then divide the pupils amongst them. Each group is asked to find a place in the British Isles and then describe what it was like there when the rocks were deposited. The older or more able students are then asked to give an approximate age of the rock, to describe the animals and plants around at the time, to suggest its position on the Earth and give an approximation of temperature and sea level. Some groups have been asked to write a story about what it was like to be there when that rock was deposited. Were they on land or in the sea, could they stand up, what wildlife could they see, how hot was it? This exercise has also been done with carefully chosen rock specimens. The pupils are told what the rock specimens are (or not if they are supposed to know), and from where they were collected. They then describe the palaeoenvironment that existed when the rock was deposited.
I also take the posters on field trips and use one as an introduction, for example at Tedbury Camp in Somerset, we are looking at dipping Carboniferous limestone, on the top of which is horizontal Middle Jurassic oolitic limestone. From the left side panel of the poster, (manageable size if only that is opened), the ages of these two deposits can be seen and it is evident that there is a lot of material missing in between. Some idea of the animals and plants around at each time is given, as well as the positions of the plates and an idea of temperature and sea levels compared with today.

The poster is also used by me at the many talks I give to local groups, e.g. U3A, local history, W.Is etc. Once again, it is universally well received with everyone finding something of great interest on it. 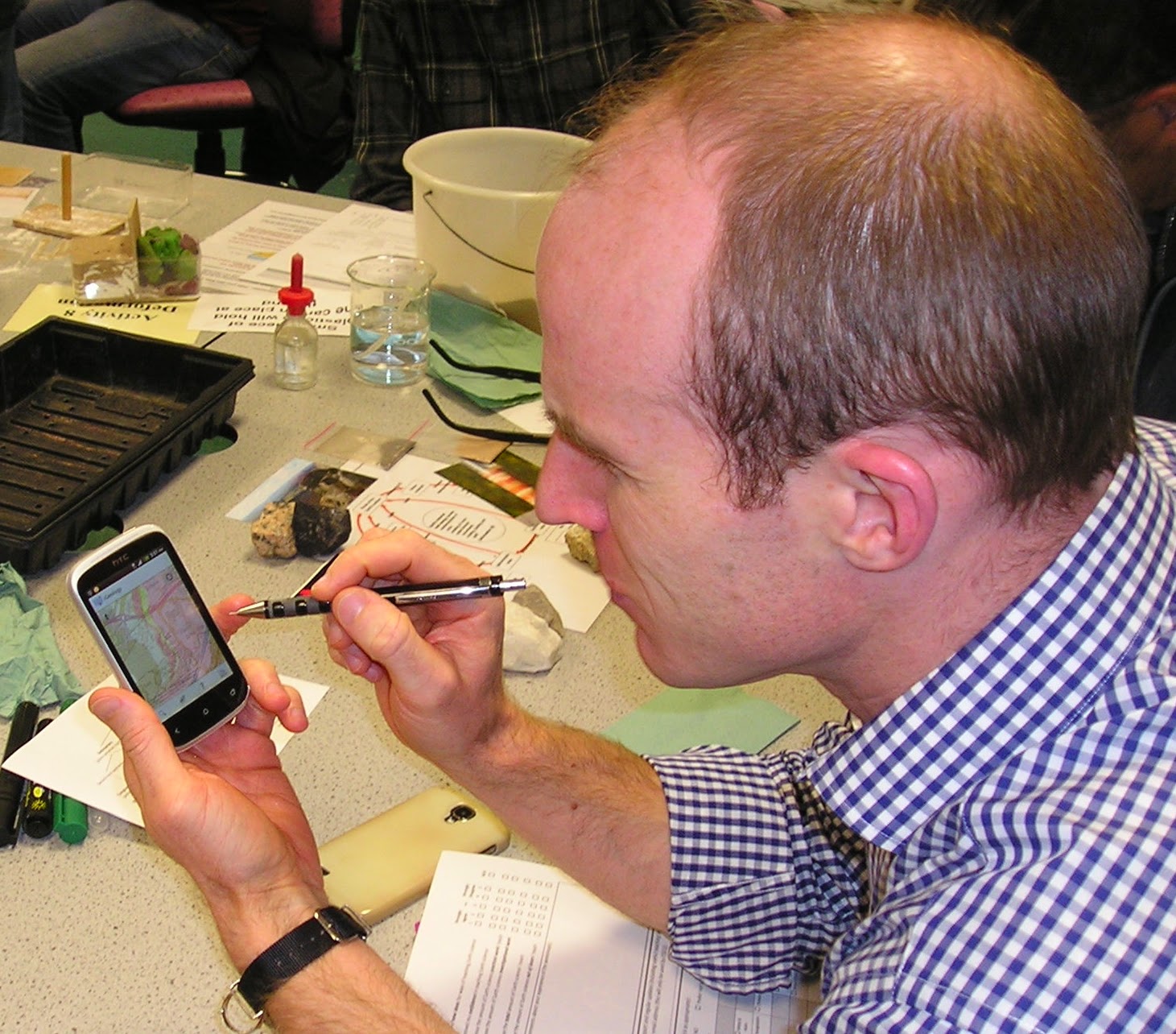 But, it is not only the poster that is brilliant from BGS. iGeology and OpenGeoscience are wonderful and especially so because they are free! With a recent tutor group, I spent some time with OpenGeoscience searching for participants' post codes. I usually choose 'imagery' as the base map and then the slider bar, which slowly adds the geology to their home area, is quite spectacular. In my sessions with teacher-trainees particularly, I make sure I don't mention the iGeology app until near the end as, inevitably, they all start to download it immediately.
If I say more in praise of BGS, you will begin to wonder if I am an employee (not) but to end, I suggest that everyone should look at their website which has SO much excellent material available. There are just not enough hours in the day to do it all justice.
Thank you everyone at BGS; I think I am now on my twelfth box of posters!