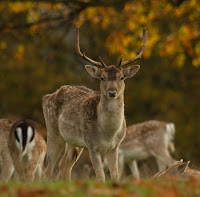 The Project
The Fallow Deer Project is an AHRC-funded multi-disciplinary study looking at the cultural history of Dama dama dama, the European fallow deer. The project is being led by Dr Naomi Sykes, an archaeologist from the University of Nottingham, Prof. Rus Hoelzel (a geneticist from the University of Durham) and BGS’s Prof. Jane Evans. The team are working with researchers from a number of fields and institutions up and down the country- from archaeologists and art historians, to musicians and deer stalkers.

Why Fallow Deer?
Of all the world's deer none has a closer relationship to people than the European Fallow Deer. Ever since the Neolithic, humans have selectively transported and maintained this elegant animal, taking it from its native, restricted range in the eastern Mediterranean across Europe where it is now an established icon of stately homes. Wherever fallow deer have been introduced they have altered the physical and psychological landscape and their distribution is a direct record of human migration, trade, behaviour and worldview. Given their impact and significance, fallow deer have the potential to provide cultural data of the highest significance to a range of disciplines and audiences.

British Geological Survey and the NERC Isotope Geosciences Laboratory (NIGL)
One aspect of the project is the investigation of the biogeography and management of fallow deer through history. For this we are using a combination of isotope analyses (C, N, Sr, S, O) to look in depth at the archaeological remains of ancient and modern fallow deer populations. Stable isotopes, chemical signatures retrieved from the bones and teeth of archaeological and modern deer, effectively record traces of what and where individual animals were eating at different points in their lives. This can help us to look at questions related to the importation of animals, founding herds and changing management practices. This part of the investigation is being undertaken at the BGS NIGL facility in Keyworth by the projects Co-Investigator, Professor Jane Evans, Isotope Geochemist Dr Angela Lamb and me: Post-Doctoral Researcher Dr Holly Miller.

The results of the project are being disseminated through a range of different media for a variety of different audiences –academic papers, magazine articles, exhibitions and also films that will be uploaded to the websites of various heritage organisations. Just the other week, the team were filming at BGS for a short documentary on fallow deer that will be linked to an exhibition at the internationally renowned Fishbourne Roman Palace Museum in Sussex.

ED: Check out the website for their great work... and to read ''The Pooping Deer of Belton' a poem by Ione Jones.
angela lamb deerproject fallow deer holly miller jane evans NIGL