on October 10, 2012
Caves aren’t just holes in the ground. They are also valuable geological archives. The type of cave, its shape, length, morphology, along with the sediments and stalagmites they contain, all provide information on past climates, hydrology and landscape evolution. Moreover, these archives are preserved intact for millennia, protected from surface weathering, erosion and bioturbation. Cave sediments and stalagmites can also be dated, thus enabling these archives to be set in their rightful chronological context. So, when the BBC asked me to film a piece for ‘The One Show’ on the geology of a recent discovery in a cave in Cheddar Gorge, it was too good an opportunity to pass up.
﻿﻿
﻿﻿

Reservoir Hole is a cave in the side of Cheddar Gorge, discovered back in the late 1950’s by a local geologist, Dr William Stanton. A few years ago, a group of Mendip cavers (most of whom are retired with an average age of over 60!) began digging at various points in the cave. I visited the cave on a tourist trip last year with one of the diggers, Martin Grass. They had looked at one site in the cave where a good draft was blowing out through some boulders. Dissolutional flow markings on the wall known as scallops indicated that large volumes of water had flowed down this choked passage. I suggested, based on the geological evidence, that this particular site would be well worth excavating to try and find new passage. So I was delighted when Martin Grass rang me up in early September to announce that the dig had ‘gone’ and they had found a continuation of the cave. It is always very gratifying when a prophecy comes true!
﻿﻿

It transpired that not only had they found some new passage, but also one of the largest, most impressive chambers in the UK, which they named ‘The Frozen Deep’. Moreover, the chamber is superbly decorated with some fantastic white stalagmites, stalactites and columns. So, a few days later, I found myself down the cave helping to survey some of the passages and to take a look at the chamber. Being only the fifth person to explore this new find was awesome. More people had been to the moon, yet we were only 20 miles from Bristol, and only a few kilometres from where I grew up. The find made quite a splash in the local news.
﻿
﻿

Then the BBC got involved, wanting to feature the discovery on ‘The One Show’. So, in early October, a team of very experienced cavers, along with the BBC presenter Miranda Krestovnikoff assembled in Cheddar Gorge, along with a mountain of tackle bags containing cameras, ropes, lights and batteries all of which had be carried underground. The script was that Martin and I would escort Miranda down the cave, with Martin explaining how they discovered the cave, whilst I, as a BGS geologist, would provide some of the background information about why the cave was so big and how the stalagmites grew.
﻿
﻿

The chamber had also been scanned with a 3D Laser Scanner, loaned by Leica Geosystems the previous week by Kevin Dixon with help from the digging team (another 12 hour trip). Miranda had the results on an Ipad, along with a similar scan of Gaping Gill in Yorkshire, Britain’s biggest known chamber. The results were revealed to us whilst we were being filmed, and it turns out that The Frozen Deep, with a floor area of 2981 m2, was now the largest chamber in the country, some 252 m2 larger than Gaping Gill.
﻿﻿

Nine muddy hours, and a lot of hard graft later - cameras and batteries are heavy, we exited the cave with over an hour of footage. However, on watching ‘The One Show’ the following evening, I think we were all pretty gutted that our piece had been cut to less than 2 minutes, Apparently ‘due to studio time constraints’ they had to cut a minute or two of the Frozen Deep film, which meant all the interviews I gave ending up on the cutting room floor.
﻿﻿ ﻿﻿﻿﻿﻿
﻿

The moral of the story is that media companies are not there to promote your science, no matter how good it is, but to deliver light entertainment, often with very tight schedules. In this instance, Roger Moore’s eyebrows were deemed to be of far more public interest that night than the geology behind the UK’s largest and most spectacular cave. However, it was still worth going, as with the filming lights it was possible to see far more of the spectacular chamber. Perhaps more importantly, it allowed me to examine the scalloping on the passage walls which showed that there has been at least two phases of water flow through the approach passage, and to identify former water-table levels. This, along with evidence from other nearby caves, enables us to piece together the history of cave formation and base-level lowering in the Cheddar catchment. Coupled with dating of cave sediments and stalagmites, this will enable us to quantify rates of cave formation and valley incision over the last million years.

Andy Farrant - links to his full staff profile at bgs.ac.uk 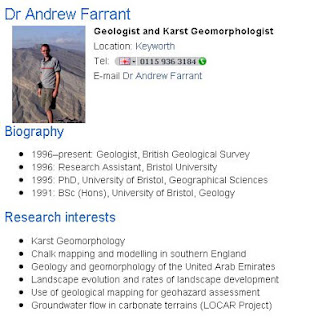 Unknown said…
I love reading through your blog, I wanted to leave a little comment to support you and wish you a good continuation. Wishing you the best of luck for all your blogging efforts.
Research Paper Spot
6:25 am, February 19, 2013