Seismology in the UK / / by the Comms Team 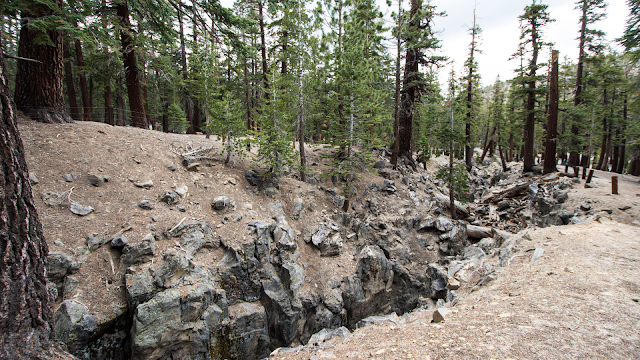 Last Tuesday the National Seismic Network, operated by BGS, detected a 3.5ML earthquake, which took place near Leighton Buzzard in Bedfordshire at 8:45AM.

Soon after, BGS started getting reports of the earthquake via our website, social media and via email. The press team put up a holding statement to let interested parties know we were looking into the matter as our seismologists got to work.

Data from the monitoring stations located around the UK was used to pinpoint the precise location and size of the earthquake. This preliminary data was then published on our website, and uploaded to our social media feeds.

Our results take slightly longer to upload to our channels than automatic seismology feeds, as a BGS seismologist manually checks and approves all the data before it is released. Once our data was approved, we spent much of the day responding to the press and questions from social media.
Any UK earthquake - especially a relatively big one, in UK terms - tends to draw attention. With the addition of a 2.1ML earthquake in the same area on Sunday night, we've had a lot of interest in UK seismology in the past couple of weeks. With that in mind, we decided that it would be a good time to share with you some of the most common earthquake questions, and answers:

What does a seismograph look like, and what do the lines show? 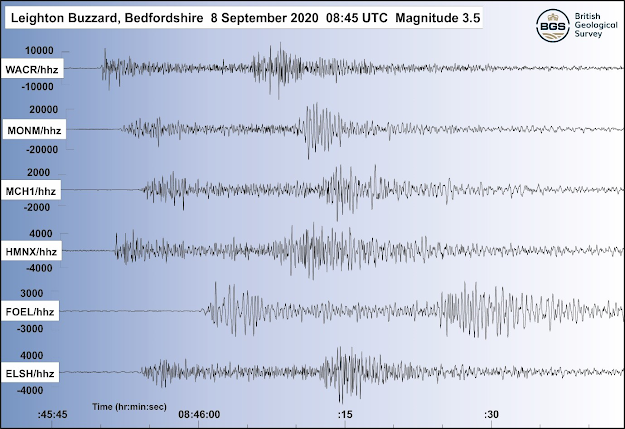 The lines show the movement of the earth up and down at six different seismometers over time. The movements are very small – of the order of micrometres.

What's the difference between an earthquake and seismic activity?

An earthquake is an occurrence of seismic activity. When someone uses the phrase ‘seismic activity’, it might be used to describe several earthquakes happening in one go, or just a single quake.

Why are there magnitude discrepancies?

Sometimes our ML (or local magnitude) is slightly different to that reported elsewhere, which is most often due to us estimating the magnitude of the quake using different stations to other agencies.

Why is depth important?

The depth of an earthquake makes a difference to how strongly it is felt and how widely. A shallow earthquake will, in general, be felt more strongly nearby, but be felt over a smaller area, than a deeper earthquake of the same magnitude.

Why do earthquakes happen in the UK?

Although distant from the nearest plate boundary, the Mid-Atlantic Ridge, earthquakes occur as crustal stresses within the tectonic plates are relieved by movement occurring on pre-existing fault planes.

How often do earthquakes happen in the UK?

Between 200 and 300 earthquakes are detected and located in the UK annually. Whilst the magnitude 3.5 Leighton Buzzard earthquake is small by world standards, it does attract public attention as it’s a large quake for the UK – the last of a similar size being the 3.8 Grimsby event in June 2018.
Earthquakes of such minor magnitude are unlikely to cause any damage but can make house shudder slightly, much like if a heavy goods vehicle (HGV) passes close to a house. Some small property damage can occur but this is rare. 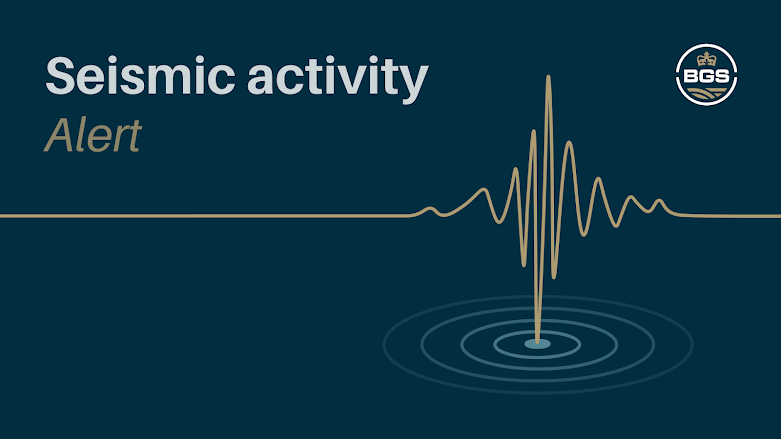 Why is it important to alert BGS about your experience of the earthquake?

As it mentions on our earthquakes webpage, this helps our seismologists gauge the intensity of an earthquake:

" ...assigning an intensity requires a sample of the felt responses of the population. This is then graded according to the EMS intensity scale. For example, Intensity 1 - not felt; 2 - scarcely perceptible; 3 - weak and felt only by a few, up to 12 which is assigned for total devastation. Study of intensity and the production of isoseismal maps, contouring areas of equal intensity, is particularly important for the study of earthquakes which occurred prior to instrumental monitoring."

We often get reports from the public about what they felt, or didn’t feel, during an earthquake. You may have seen us asking local people who felt the earthquake to fill out a ‘felt report’, which is our system of getting updates from the local area. The Leighton Buzzard quake was awarded an intensity of 6.
These intensity reports also help us to compare recent earthquakes of known magnitude with historical 'felt' earthquakes that were not recorded with modern instruments.

At any point, if an earthquake happens near you, it would really help our seismologists if you fill out our online felt report, even if you didn’t feel the quake.

We hope you find this information helpful. For more information on UK-based seismic activity, please visit our website.