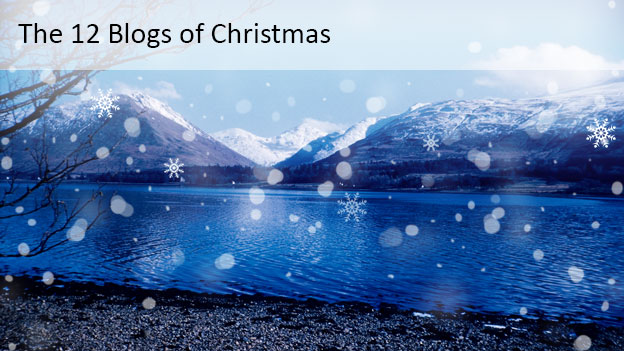 GeoBlogy, the name for the BGS blog, is a great way to get a flavour of what goes on at BGS and gives you a glimpse of the challenges and achievements of those who help to make us a world-leading geological survey. From geologists to cartographers, from groundwater to space weather and from breaking discoveries to the daily grind; you'll find all of this and everything in between on our blog and it will give you a true taste of everything that goes on at BGS.

For Christmas, we thought we'd share the top 12 blogs on GeoBlogy from 2018, so sit back and relax and find out what was hot on the BGS blog over the last year.

Our most popular blog from 2018 was this one from Cath Pennington, engineering geologist, landslide specialist and of course science writer at BGS. Written back in June, this blog was put together 25 years after the Holbeck Hall landslide as a result of some unseen video footage turning up in our archives, taken at the time from an aeroplane (drones hadn't been invented yet). There is no sound and the images are a little hazy due to the weather, but you can get a good idea of the scale of this landslide and some of the damage it caused.

2. PODCAST: Geology is boring, right? What?! NO! Why scientists should communicate geoscience...by Catherine Pennington

Our number two slot also goes to Cath Pennington who decided to take matters into her own hands after being told one too many times that geology is boring! In this blog Cath shares a brilliant podcast that she put together after a conference on Communicating Geoscience run by the Petroleum Group of the Geological Society.

3. Do Shale Resources Have Any Place in a Green Great Britain?...by Joe Emmings

Joe Emmings, a Post-Doctoral Research Associate in shale gas and geochemistry has got the number three slot in our 12 Blogs of Christmas. His excellent blog explored how shale resources could help the UK transition to much cleaner energy such as renewables and was published as part of Green Great Britain Week, meaning that it attracted quite a lot of attention!

The number four slot was obtained at the end of May when we published this blog to coincide with the release of a new dataset and web portal, that even includes a handy 'try me out' section. The new website that it talks about enabled users to input their own data and compare it with the reference data from three isotope systems (Sr, O and S) that characterises the contemporary British biosphere, in order to assess the likely geographic origins of their sample. The method has its roots in archaeological studies of human migration for example to establish a likely place of origins of our ancestors but it is likely to be applicable to other research areas such as forensic and food traceability.

5. Not a boring story: the impact of sharing data...by Gerry Wildman

The number five place goes to Gerry Wildman, data and science services manager at BGS. Gerry's blog tells us of the impact of BGS scanning our collection of legacy borehole records and releasing them as open data on our OpenGeoscience website. Overnight, the number of borehole records accessed went from 2,000 a month to 20,000, and in 2017 we logged over 2.5 million downloads!

6. Update from the elephants...by Fiona Sach

Back at the start of 2018, Fiona Sach, currently the elephant coordinator for the Zoological Society of London wrote a guest blog for us updating on her work into reducing Human-Elephant Conflict surrounding Kruger National Park. The interdisciplinary project involved geochemistry, plant science and animal health between a range of partners including the BGS and the University of Norttingham.

7. Learning to code: the benefits of taking a BGS sabbatical...by Rachael Ellen

Some of our most popular blogs are about the various career development opportunities at BGS, and Rachael Ellen's blog from July is an example of this. Written back in July, Rachel's blog tells us how she took a break from the world of geology to do something completely different and outside of her professional comfort zone and took an adventure into the world of software development supported by the BGS Sabbatical Scheme.

Back in 2017, one of the largest storms of the current solar cycle hit the Earth. Starting around 11.30pm on 7th September, the first and deepest part of the storm lasted for around 3 hours and beautiful aurorae were visible all across the UK. At around 1pm on 8th September a second burst arrived though it was during the day in the UK so the aurorae were not visible. They were however detected by the newly installed BGS Schools Magnetometer Network! Ciaran Beggan, geophysicist at BGS and member of the geomagnetism team tells us all about it in the number eight blog in our list.

Published in recognition of the UN International Day for Disaster Risk Reduction in October, Joel Gill's blog celebrated the actions that people and communities around the world are taking to reduce their exposure and vulnerability to disasters. It also reflected on the research, innovation and training needed to advance this work and ensure sustainable and resilient communities and looked at how BGS is working to address many of these issues.

Back in September, Melanie Leng, Science Director for the Stable Isotope Facility & Director of the Centre for Environmental Geochemistry, wrote a series of article for Geoscientist, the magazine of the Geological Society, giving advice for new and current geoscience PhD students. She very kindly put this into a great blog with seven key points that range from organising your data to dealing with your supervisor.

Our last two blogs are both written by BGS Director of Science and Technology, Prof Mike Stephenson. The first one looks at how important geoscience is to energy transitions and he looks at the technologies and geopolitics that underlie present and historical movements in energy sources including the most recent move towards renewables from fossil fuels.

The last of our top 12 blogs is again from Mike Stephenson and looks at the 'geology-energy-climate nexus', or the intimate relationship between geoscience, energy supply and climate change. This very much concerns groundwater and its importance to climate change adaptation with the question of just how important groundwater will be in helping people to adapt to climate change.

You can receive regular updates from GeoBlogy by subscribing using your email address here.