Going South Part 1: How to get to the Falkland Islands...by PhD student Rowan Dejardin 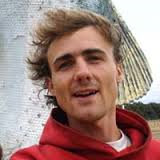 My PhD project (jointly funded by BGS and the University of Nottingham and within the Centre for Environmental Geochemistry) is focussed on trying to reconstruct changes in ocean conditions through the last 15000 years around the Subantarctic island of South Georgia. The marine sediment cores that I’m working on were collected in 2012 by the British Antarctic Survey (BAS) ship, the RRS James Clark Ross (JCR), that sails south every year to conduct a range of science projects in addition to providing logistical support to British Antarctic bases. Earlier this year I successfully applied for funding from the Collaborative Gearing Scheme to join a BAS scientific cruise sailing from the Falkland Islands in November, so that I could collect sediment samples that will allow me to calibrate the proxies I am using to reconstruct past conditions.

The first challenge of this adventure is getting from the UK to the Falklands Islands! The simple way to get there is with the MOD operated flight via Ascension that takes around 20 hours. Unfortunately, a couple of weeks before we were due to fly, we found out that there wasn’t room on the MOD flight and we’d be flying with commercial carrier LANChile on a slightly more circuitous route that takes around 50 hours! In spite of the excessive length of this route it did provide to opportunity for a flying visit to Santiago, Chile, where we spent the night awaiting our connecting flight to the Falklands. As this followed the best part of 24 hours travelling from the UK, via a brief stopover in Sao Paulo, Brazil and absent bags in Santiago, we were all a bit dazed but managed to drag ourselves into the city for gigantic steaks and Pisco sours, the local specialities! Somebody had evidently informed the tectonic plates of the time of our early morning flight as we were woken by an earthquake just in time to grab some breakfast before heading off again. The ‘quake was small by local standards but pretty exciting for us tourists!

Another advantage of this longer route was the spectacular views afforded by following the Andes south from Santiago to Punta Arenas (where we briefly landed to go through Chilean customs), before crossing the mountain range on our final leg of the journey to the Falklands. We finally arrived at Mount Pleasant airport two days after we set off and were driven through stunning Falklands’ scenery, full of jagged stone ridges and rivers of rock, to the port of Stanley, where the JCR was waiting for us!

The next couple of days were spent setting up scientific kit and making sure everything was securely lashed to the deck before set off to cross the unpredictable Drake Passage. In between this work we were lucky enough to get some free time to walk out to some of the islands’ beautiful white sand beaches were we saw a Gentoo penguin colony, a young elephant seal, a lonely king penguin, and tiny Commerson’s dolphins playing in the surf!! We’ve tested some of the new equipment (and I saw my first ever live foraminifera!) and we should be heading out to our first destination, Signy in the South Orkneys, in the next 24 hours or so. We’re all keen to start doing some science as soon as possible and I will endeavour to provide more updates on the progress of the cruise!
Rowan is supervised at the BGS by Melanie Leng, at Nottingham by Sev Kender and George Swann, and at BAS by Vicky Peck and Claire Allen.