on February 27, 2013
Back in February 2012 (before this blog was even a glint in my eye) I picked a box in the store at Gilmerton and decided to document its journey down south. Lucky Box S30000. This was all to illustrate how the BGS were moving the entire UKCS cores (at least 172,000 boxes) from our Gilmerton site (Edinburgh) to the new shiny purpose built facility at our Keyworth site (nr Nottingham). 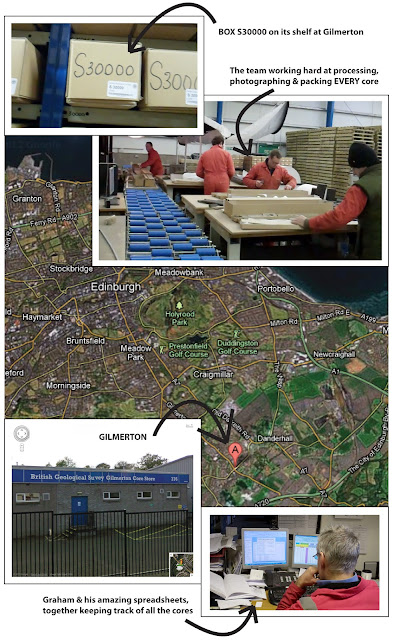 I wanted to see how it was all being managed and what was actually involved day-to-day. In the end I travelled 300miles and 9 hours in a lorry plus encountered snow, very early mornings, balaclavas and lots of strong coffee! 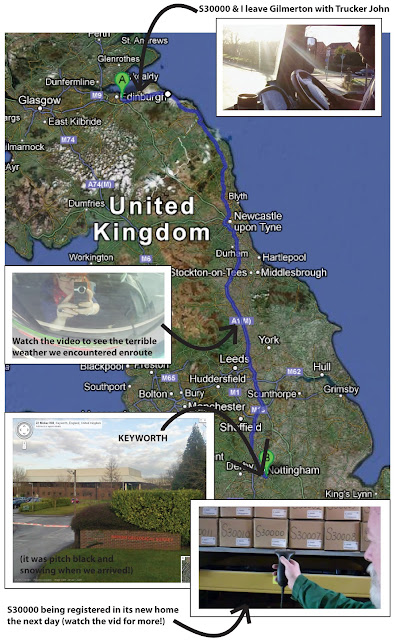 Here’s the video of the journey  I made back in Feb/March, it’s been released now because the project is complete and all the UKCS cores have been successfully moved.  Well done everyone! I’ve popped other videos and information on our website , there's also information on GeoScience Data blog, if you want to know more about the move and new store.

Fact alert!
There were over 172,000 boxes of core that needed individual care, packing, recording, photographing and transporting 300 miles down south.
End to end the boxes would've stretched a total length of 163,000 meters (102 miles) which is 40 laps of brands hatch, 4 marathons, just shy of the length of the M25 or just over the distance from Edinburgh to Inverness.
They had a total volume of 3200m3 more than enough to fill an Olympic size swimming pool and a total area of 26,500m2 enough to cover 3 football pitches.
Congratulations everyone. Big thanks to trucker John who put up with me in his cab for 9 hours!!

Unknown said…
My brother just got a great new job in fleet management, so I've been curious as to what goes into the whole process. Very informative, thank you!