Boreholes, Wells and Springs in the Ethiopian Highlands / / by Rachel Bell

on December 19, 2019
Since 2016, Rachel has been involved in a project funded by NERC and DfID investigating the resilience of rural water supplies in the highlands of Ethiopia, specifically studying the response to the 2015/16 El Niño drought. As part of this work she recently travelled to Ethiopia to download data from sensors previously installed to look at how water levels are changing in sources that people use for drinking water... 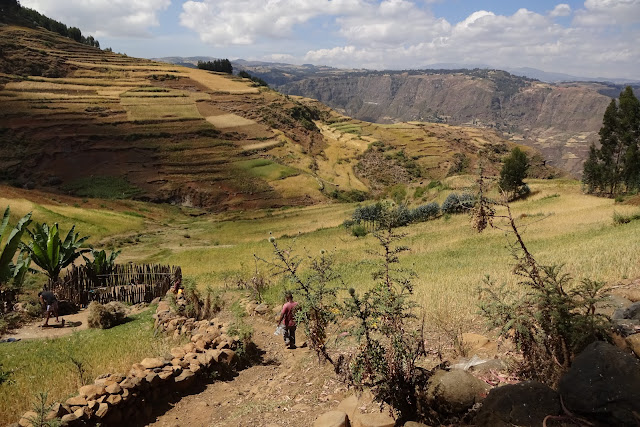 The El Niño project in Ethiopia has seen me visit the highlands of Ethiopia five times in the past couple of years to look at how the quantity and quality of groundwater is impacted by severe droughts. We were focusing on rural areas, as remote communities are often entirely reliant on groundwater for their drinking water. People in these parts predominantly use 3 different types of water collection: boreholes (50 – 60m deep), hand-dug-wells (~5m deep) and springs. We chose two different districts to investigate the behaviour of these sources, Kobo and Lay Gaynt. During the 2015/16 El Niño drought, these areas were both classified by UNICEF as Priority 1, which means that they were impacted most by a lack of water and food.
Working with our colleagues at Addis Ababa University; Professor Seifu Kebede, Dr Tilahun Azagegn and Yehualaeshet Tayitu, we carried out groundwater sampling for water quality (including samples for analysis of major and trace elements, stable isotopes and microbiology) every few months from the different water source types. To look at water availability after the drought, Andy McKenzie (British Geological Survey) installed 20 pressure transducers, to measure water levels every 15 minutes. As usual with fieldwork, our most recent visit highlighted some of the pit falls of a relatively new method of using these loggers – things went wrong, quite a lot!  Sometimes the Kevlar string we used to hang the loggers on would be horribly tangled, we assume during maintenance, and the logger would no longer be in the water. Other times the Kevlar would be cut and the loggers missing, a very sad sight. In total we lost 10 loggers and had 10 left, not great odds!

Despite losing a lot of the loggers, the data we got from them was really useful and we can start to look at people’s water usage. One of the most interesting outcomes is the patterns we see in the shallow borehole water levels (green line). You can see there is a wavy pattern with short spikes both above and below the main pattern. For religious reasons communities in certain areas don’t use the borehole on weekends; the spikes below the main line are when the borehole is used more on the Friday to store water for the weekend and the water level has more time to recover over the weekend, hence the additional rise on the graph each week. You can see that the water in the hand-dug-wells struggles to recover once the rainfall stops, the steep decline in water levels is linked to a lack of storage in the aquifer and they have little resilience to periods of drought.

During my most recent field visit in March 2019, we handed out laminated printouts of the water level data that we have been collecting to show the communities what the sensors we were putting down the boreholes were doing. It was useful for us to discuss this with them and also show them where we had seen issues with water quality.  After the start of the main rainy season, microbiological quality of the water rapidly decreases and boiling water can help avoid people getting sick from bacteria such as e-coli.

On a personal level, while away I like to keep in touch with people while I'm in Ethiopia but often my UK phone has no signal, so during my trips I use a GPS SPOT tracker to chart how my journey is progressing. I don’t often get to see these maps when I'm on the ground, as I never have signal when I’m out there but they're fun to look at on my return! The SPOT tracker also works really well because my family, friends and colleagues can all keep an eye out to see where I am while I’m away.
And finally to the food… For most meals, people in Ethiopia eat a fermented sourdough flatbread called injera. This is made out of teff, Ethiopia’s most important crop, but one that I hadn’t come across until I first visited in 2016. At first I struggled with the taste as it has a ‘tang’ to it, but on my last trip I found I was enjoying it more and more. A typical example is in the photos. I am also now a convert to the very refreshing Mirinda orange drink, and will only drink Ethiopia coffee. Before I left from my last trip I also learnt to write my name in Amharic script. I was very proud of myself and even wrote some it on some of the labels we leave attached to the loggers!
We’ve left the loggers installed (where they weren’t lost!) and I’m looking forward to my next trip back to Ethiopia!

The El Niño project was managed by Professor Alan MacDonald at BGS and been a team effort of people including; Professor Seifu Kebede, Dr Tilahun Azagegn, Andy McKenzie, Dan Lapworth and Yehualaeshet Tayitu. Other collaborators include Florence Pichon, Roger Calow and Eva Ludi from the Overseas Development Institute and Emily Black and Matt Young from Reading University.