on June 18, 2019
Ciaran Beggan is a geophysicist based in the Geomagnetism team at BGS. He works on global magnetic field modelling. Here he presents recent improvements to the BGS Global Geomagnetic Model (BGGM) which now possesses a very high spatial representation of the crustal magnetic field and a new description of the associated uncertainties.


High accuracy magnetic field maps
Every year, the BGS Geomagnetism Team update our maps of the Earth’s magnetic field for commercial use. These maps are used, for example, by directional drilling companies who navigate the subsurface using a digital compass embedded in the drill-string for precision steering. The technique is a form of dead-reckoning and hence needs very accurate values of the magnetic field underground.

When you make a measurement of the magnetic field at the Earth’s surface, it has three main sources. The vast majority of the field comes from the outer core (around 95%), a smaller fraction comes from the iron-bearing minerals in the crust (around 2%) and the third part arises from the external field (about 3% on average). Luckily, each source has different spatial and time variations, which means they can be disentangled if we have enough global measurements over a long enough period. We live in an era where data from both satellite and ground observatories are plentiful and can be used to identify the contribution of each source.

For example, the core field is global in scale and changes slowly over months, in a relatively predictable fashion. This makes it easy enough for satellites to detect. The crustal field varies on continental or smaller scales and is unchanging on human timescales. Some fraction of it can be measured by satellites but the smallest parts cannot be resolved as their signal fades away with height. Finally, the external field changes rapidly and varies widely across the globe, though it is largest at high latitudes where the aurora appear. The ground observatory network is best for picking out this contribution.

Updated maps of the crustal field and uncertainties
Over the past five years, we have been working to steadily improve how well we map each of these sources. With the abundance of magnetic satellite data, the core field can be easily charted and crustal sources larger than 300 km are visible. In the past year, we have enhanced the dataset used to create the crustal map and brought the spatial scale down to around 30 km by using global datasets collected by aeroplane or ships since the 1960s. This has involved processing almost 2 billion magnetic field measurements and solving an optimisation problem to find a best-fit solution between the input data and the so-called model Gauss coefficients. This is a ‘big-data’ problem and requires a lot of computing resources (using our in-house HPC) to solve in a reasonable time. Figure 1 shows the improvement between satellite-only datasets (panel a) and the higher resolution aeromagnetic dataset (panel b).

In addition to the new high-resolution maps of the magnetic crustal field, we have also studied the confidence (or errors) associated with the data portrayed in the maps. This is important when drilling underground as it defines the ellipses of uncertainty associated with a well path’s location as it becomes longer. It helps to constrain the position of the well at all times and defines ‘no-go’ zones, which could include unwanted intersections with other boreholes.

Figure 2 shows the uncertainty values in Declination, Inclination and Total Field as one standard deviation (1σ) values. Note there is a strong variation across the globe related to the general strength and shape of the field. The South Atlantic Anomaly is a large area of weak magnetic field strength, which affects the uncertainties, while the polar regions, where the aurora occur, also have higher uncertainties.

Both the high-resolution crustal maps and their uncertainties are entirely novel products and are part of the 2019 release of the BGS Global Geomagnetic Model. 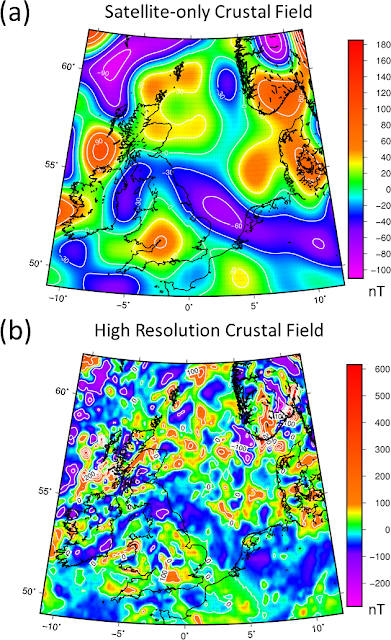 Figure 1:  The vertical magnetic field strength of the crustal field in the North Sea region (a) derived from satellite-only data and (b) from the new high-resolution map, compiled from aeromagnetic and marine datasets (in addition to satellite data). Note the change in colour scale.