In a jam: the impact of geology on the Stonehenge tunnel scheme...by Andy Farrant 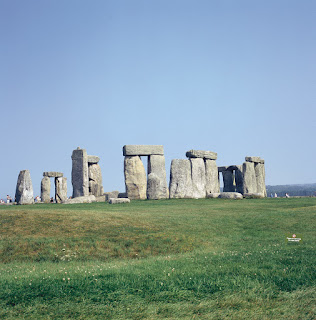 The mention of Stonehenge often conjures up visions of standing stones and druids, but more often than not traffic jams also spring to mind. As anybody who has driven along the A303 in summer will know, the road past Stonehenge is a regular bottleneck. Traffic flows regularly exceed capacity and impacts one of the most iconic sites in the UK. In 1995, Highways England put forward proposals for a cut-and-cover tunnel to bypass Stonehenge. This was rejected following protests about the impact on the archaeology. New plans for a 2.1 km tunnel were drawn up in 2002 with an estimated cost of £183 million — before the impact of geology was assessed.

Like many other major infrastructure schemes in southern England, the tunnel was scheduled to be excavated in Upper Cretaceous Chalk. To the uninitiated, Chalk may appear to be a relatively homogenous flinty white rock, but to a geologist or engineer it is anything but. Its composition varies a great deal, ranging from soft clay-rich chalk without flints to very hard nodular chalk with abundant flints. The Chalk is also a major aquifer, the name given to a permeable rock that contains groundwater, so tunnelling can be problematic, especially where faults or major flint bands occur or where there are soft, weak or weathered chalks.

When ground investigations started at Stonehenge in 2001, the most relevant up to date BGS geological map was from 1903. This showed the whole route as being underlain by ‘Upper Chalk’, which is not much use for developing a ground model or predicting engineering properties of the chalk! Site investigation boreholes were drilled along the tunnel route to understand the geology before tunnelling. In the Chalk, identifying key features such as flint bands in borehole cores and sections is an essential first step in understanding the ground conditions. Correlating these markers helps identify geological structures such as faults and helps tunnellers to predict difficult ground conditions.

In 2003, BGS remapped the Salisbury 1:50,000 sheet including the area around Stonehenge as part of the BGS national geological mapping programme. The ‘Upper Chalk’ is now divided into four formations: the Lewes Nodular, Seaford, Newhaven and Culver Chalk formations. The geological mapping confirmed the presence of the phosphatic chalk channels and identified several faults and fold structures. The very weak sandy phosphates occur within the upper part of the Seaford Chalk Formation, and the channels are overlain by the Newhaven Chalk Formation. We were able map out the main axis of the phosphatic chalk channel which extends for almost 2 km southwest of Stonehenge. The mapping was assisted by the use of high resolution palaeontology provided by Mark Woods and Ian Wilkinson. More recent fieldwork earlier this year confirmed the spatial extent of the Newhaven Chalk infilling the channels. The data was used to construct a geological cross-section along the proposed tunnel route.


Impact of geology on the tunnel scheme

The discovery of these phosphatic chalks had a major impact on the proposed tunnel scheme. The weak sandy nature of the phosphatic chalk, and the identification of several zones of weathered or faulted chalk influenced the design of the proposed tunnel and the machinery required to excavate it. The possibility of radon gas from the potential radioactive minerals in the phosphatic chalks and the risk of groundwater contamination were other environmental considerations. Disposal of phosphate-rich tunnelling spoil also posed a problem as it was likely to impact local vegetation.

The nature of the geology and groundwater conditions led to construction costs to more than double from £183 million to an eye watering £470 million! On 20 July 2005 the tunnel scheme was withdrawn by the Government partly due to rising costs of construction.

In January this year, the Transport Secretary, Chris Grayling announced a new proposal for the Stonehenge bypass including a 2.9 km tunnel to the south of the initial scheme at an estimated cost of £1.4 billon. The preferred route is to be announced this summer. BGS mapping suggests that this new tunnel will also intersect phosphatic chalk. Geology matters…

Details of the geology of the Stonehenge area based on the site investigations for the 2002 tunnel scheme and BGS mapping have just been published in the Proceedings of the Geologists' Association.