on February 09, 2013
Sorry to keep you all waiting (“all” being a generous estimate of the audience following our drilling exploits!), but the last two days of the drilling campaign in Wales have been hectic, and left little time in the evenings for me to update you. To conclude the Eastenders-style nail-biter...yes we did manage to break our record by finishing at 16m. Regrettably the final metre also resulted in MORE blue sticky clay and the hole showed little sign of any bedrock, so we were still left wondering how deep the borehole could have gone before finding anything solid.

The second photo below shows our triumphant core recovery! 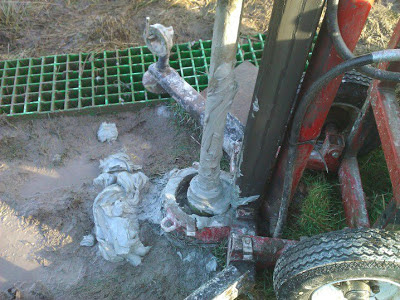 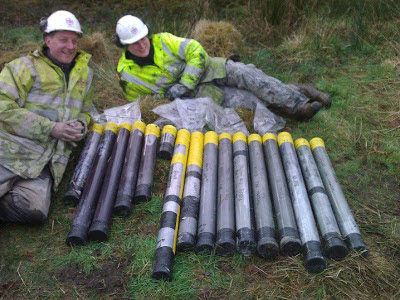 ﻿
After the exultations were over, we moved our drill site further to the north, and started anew. The amount of time left in the week meant that we wouldn’t get quite as deep as the first borehole but we made it to 7.80m. The general consensus was that the geology would be roughly the same as borehole one, but once we kicked-off we began to find some interesting stuff. The core returned only 2m of soil and peat, with some gravels coming out in the base of the second metre. The third metre bought back some stiff Till, and we drilled this until we terminated the hole at 7.80m by which time the drilling was quite slow due to the stiff and cobbly nature of the Till. We managed to smash through some of the cobbles and returned this particularly nice example of a piece of mudstone showing the typical striations associated with glacial transportation. 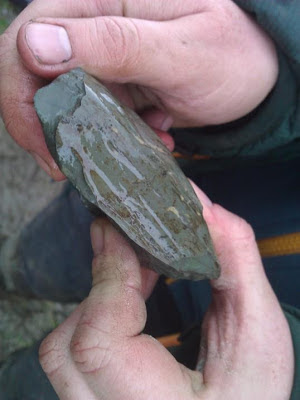 So there you have it, a rather interesting week. The drilling went a bit too smooth according to our colleagues back in the office, and I have to admit that we have had an excellent time. The weather has actually been good to us, with only a small bit of rain Wednesday evening and some spots on Thursday. The location of the drill site is possibly one of the best parts of Wales I’ve ever visited and the bonus of watching Red Kites, Ravens and Buzzards circling over us whilst drilling has to be a big perk of my job! Hopefully it won't be long until we're back...

Until next time, keep it greased