Drill Team on the Bog (Day Two) by Steve T

on February 06, 2013
After the euphoria of completing 10m in one day (this is twice the daily average!) the team struck out this morning for the bog to try and complete this borehole.

The weather overnight had brought a little snow to the hills, and the morning started with a spot of rain. By the time we got on site this had cleared up and the sky even cleared a couple of times during the day. This didn’t help with our progress, the greater depth increases the amount of labour involved. Having to lower the barrel to the bottom of the borehole in one metre lengths and retrieve it the same way takes a lot longer the deeper you get! We also had quite an audience today with staff from Aber University and BGS Cardiff visiting us. Due to the slow progress I hope that they weren’t too bored, or too cold. 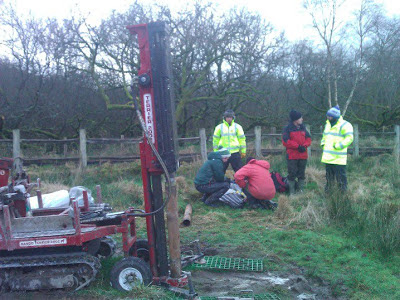 By 4pm we had managed a further 5m (taking the borehole to 15m). The material we were pulling out was still the blue-grey clay from yesterday which was a) very sticky and b) needed washing off all the drilling equipment before it could be sent back down the hole for the next run. This all adds to the time it takes to drill just one metre! The prognosis for the hole was somewhere between 15 and 20m, but it was becoming clear by the amount of time taken to drill that 20m with our rig was not going to be possible. We chose to stop tonight at 15m as this is the furthest we’ve drilled with casing and we still have to pull all that metalwork out of the ground tomorrow. 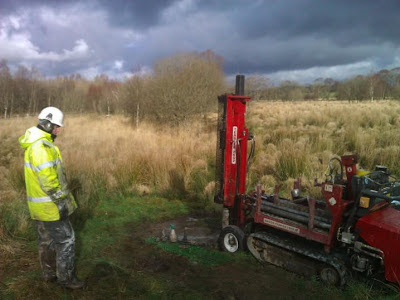 So, tomorrow will be the end of the hole. Hopefully we’ll hit bedrock, but if we don’t we will have a record depth. The furthest the team has drilled to date is 15.85m. Tomorrow we will drill our 16m, so I guess even if we can’t get to the bottom of the bog, at least we’ve broken a record!

davidbaeley said…
While reading your whole blog I am very curious to know about what will happen in the next phase of drilling. Your whole blog is like a movie having some ups and down and happy ending in the last. Great!!
8:56 am, January 06, 2015