Originally from Romania, Mihai Cimpoiasu is a postdoctoral researcher and part of the Geophysical Tomography team at the British Geological Survey.

Mihai and the team have joined an exciting project called SUN SPEARS, which looks at the physicochemical properties of arctic soils from a glacier forefield in Svalbard, Norway. Here, Mihai goes into detail about what the project entails… 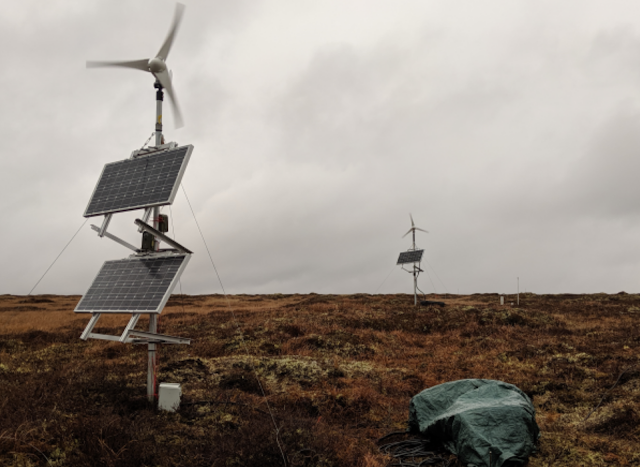 Earlier this year, BGS’s Geophysical Tomography team embarked on a very exciting project called SUN SPEARS, which stands for “Sensors under snow − Seasonal processes in the evolution of Arctic soils”. At the start of this summer, I was fortunate enough to officially become part of its international team of researchers from the UK (BGS and Queen Mary University London) and USA (CU Boulder, University of Utah and Montana Tech).

Climate change has definitely left its mark on the Arctic regions, these warming twice as fast as the global average. One of the consequences is the retreat of glaciers, which exposes terrestrial ecosystems trapped under the ice for thousands of years. This gives us the unique opportunity to study soil formation and how this is colonised by microorganisms and plants. Therefore, SUN SPEARS is looking to analyse a sequence of soils as they develop in time on the forefield of the Midtre Lovenbreen Glacier.

BGS will contribute to this project with the deployment of two PRIME (Proactive Infrastructure Monitoring and Evaluation) systems. Through an array of sensors, this instrument measures the ground’s electrical resistivity which is in turn converted into a 3D map of soil moisture. The set of measurements is performed twice a day and the sequence of images shows us the changes in soil moisture caused by fluctuations in temperature, snowmelt and other precipitations. Because this is a year-round monitoring system, its data will be able to fill the gaps in knowledge caused indirectly by the harsh Arctic weather conditions, which restrict data collection only to a few months during summer. Ultimately, this will help us understand how seasonal processes contribute to long-term development of Arctic soils.


Do we need to polar bear proof PRIME?
Although successful in other places around the world, our monitoring system PRIME will face perhaps one of his greatest challenges with the not so friendly weather conditions in Svalbard. The absence of sun during the polar winter, the -20° C temperatures, the remote location and the high winds of the Arctic are a few problems we need to deal with in this deployment.

The system is regularly powered by a solar panel and a wind turbine. This time, because the sun is dim and absent for a big part of the year, the wind turbine will do the heavy lifting. More like Olympic weightlifting when you are dealing with 65 mph winds. However, we can use the wind to our advantage. The system uses fairly low power, so any excess energy we get from the vicious winds we can use to warm the instrument chamber. This extra heat together with the chamber’s insulation should ensure stable working temperatures above 0° C.

As I said before, another issue will be the remote location of the fieldsite. Given the absence of daylight and weather conditions, during winter time the system is barely accessible, so we will have to rely mostly on its initial resilience capability. What we can do is to establish a communication stream with the system via satellite connection. We will receive daily health logs from PRIME under the form of short text messages and all the data it collects will be deposited in a storage unit which we can access after snow melt.

COVID-19 made sure that we have enough time to prepare for all of this as it delayed our first fieldwork, originally scheduled for this summer, to late spring 2021. Until then we will continue to develop the instrumentation and have a peak at how the Arctic soils look like. To by-bass travel restrictions we have asked a team of researchers based in Svalbard to send us a few samples from our field site. From these, we will derive some of the soil’s physicochemical properties (e.g. porosity, hydraulic conductivity, pore solution ionic concentration) essential for the understanding and interpretation of future data.