If you're a parent currently working from home, you might find yourself with a little more time to get creative with the kids; and we can highly recommend doing so with some fun geologically-inspired experiments. Here, we take you through some of our favourites activities from across the internet, which allow kids to learn about the Earth while having fun, and getting a little bit messy!

The Earth is made up of four layers - the inner core, outer core, mantle and crust. The inner and outer core are both made up of iron and nickel. The mantle is a fundamentally solid layer but, because of the Earth's natural heat at depth, the mantle is viscous and consequently it flows extremely slowly. The crust is a solid, relatively thin area that is made up of rocks and minerals and is the part we live on.

To help you visualise the Earth's structure, this activity from The Crafty Classroom requires playdough, a paper plate and a butter knife. You will be able to construct your own 'Earth' and slice into it to see how it is layered!

If you don't have any playdough, you can make your own! Here's a great recipe from BBC Good Food. 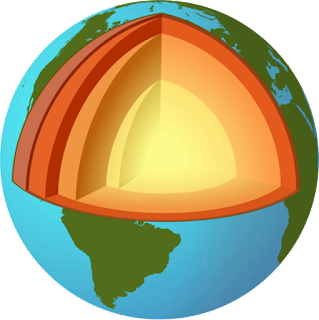 The mantle is the thickest of the Earth's layers, making up 84% of its volume. Even though the mantle is very hot at 1500°C, the high pressures means it is mostly composed of a solid green rock called peridotite.

When rocks melt they produce magma and when this erupts or flows onto the Earth's surface it is called lava.

The rock cycle describes how each of the three main rock types (igneous, sedimentary and metamorphic) change over time. Sedimentary rocks form when sediments from other broken down rocks are deposited over time in areas such as lakes or oceans. They (together with igneous rocks) can be buried and subject to heat and pressure, causing the rocks to become metamorphic. When rocks underground are heated at high temperatures, they melt and turn into magma. This magma can cool slowly underground forming an intrusive igneous rock or erupt onto the Earth's surface via a volcano, forming an extrusive igneous rock.

This experiment from The Geological Society requires blocks of dark and white chocolate, source of hot water, aluminium foil and/or aluminium foil cake cups, container to hold hot water and a simple scraping device e.g. plastic knife. It will help you understand how each of the rock types form.

PS: you may even be allowed to eat your rock creations after making them! 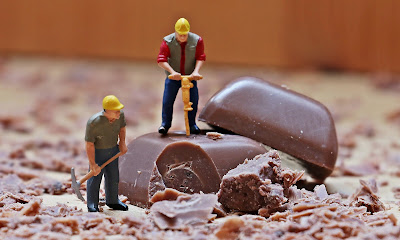 The focus is the area/point of the Earth's crust that an earthquake originates from, and where the rupture occurs. The epicentre is the point on the Earth's surface directly above the focus.

This experiment from Kids Fun Science requires cardboard, sugar cubes, a pen and two pieces of wood. You will learn where the most damage usually occurs in an earthquake. Let us know your results!

Make Your Own Volcano

Have you ever wanted make your own volcanic eruption? Well you can, with this easy to do activity!

Create some magma to sit inside the volcano and when you add baking soda, watch the lava pour out of the crater. Can you see the fizzing and bubbles? That is because carbon dioxide is being produced as a result of this reaction. Carbon dioxide is also released in eruptions, but on a much larger scale.

If you have newspaper at home, you might be able to make a paper mache version like this one from Red Ted Art. Helpful hint: if you have waterproof varnish, paint a layer over the top of your volcano, like in the image below, and you may be able to use it again and again! 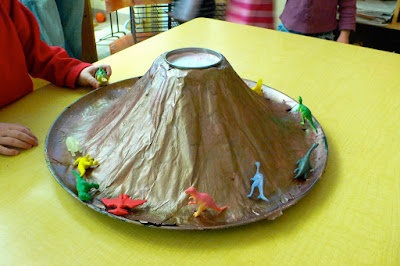