on February 01, 2019
Twenty years in the making, the Unified BARGE Method (UBM) of measuring bioaccessibility has become a British and International Standard method used to improve estimates of the risks from ingesting contaminated soil.

As a geological survey, we are interested in the details of soil chemistry and how that affects people’s health.  It’s not just about measuring the total concentration of elements, but more about estimating risks from contaminant absorption into the bloodstream. 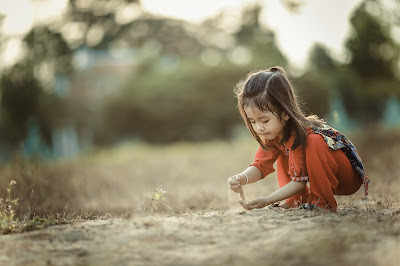 Children regularly eat soil, usually accidentally but in some cases deliberately. This soil can contain important nutrients, but also contamination. Ingestion can happen by licking fingers after playing in the garden, rubbing faces with soily hands and making ‘mud pies’.

Human exposure to soil contaminants may be damaging health. It is therefore important that we know how much soil we ingest, the amount of contamination within it, and the mineralogy so that we can better assess the risks of activities such as leisure use of parks and gardens or to support regeneration of post-industrial brownfields in our cities. 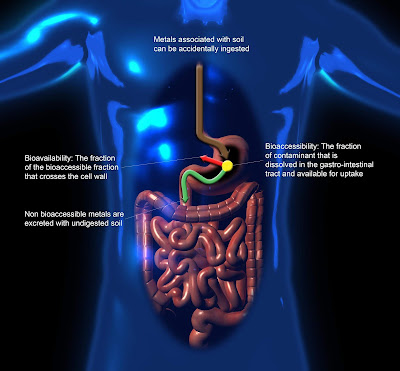 The Northampton Sand Formation as naturally high concentrations of arsenic. However our research at several proposed housing sites showed that only a small fraction would dissolve in the stomach juices and potentially pass into the bloodstream. This helped risk assessors from Land Quality Management Ltd demonstrate to the local authority that remediation was not needed before safe development of the land for much needed homes.

The longer-term legacy of our industrial past is now becoming evident. Some contaminants can still be detected at potentially toxic levels decades after they were first released. We have shown that bioaccessibility studies on soils and made ground at post-industrial brownfields can improve decisions on future land uses.

We can measure the bioaccessible fraction of soil contaminants by simulating the chemical and physical conditions found in the human gastro-intestinal system, e.g. the composition of fluids, body temperature and the amount of time solids stay in the gut.

For the last 20 years, staff at BGS and our industrial and international research partners, have been developing a robust laboratory based method for the correct estimation of bioaccessibility.  Such estimates provide defensible information for use in risk assessment and policymaking.

The BGS is part of BioAccessibilty Research Group of Europe (BARGE). BARGE started as a small network of European research teams, comparing methods for a range of soils. We have now expanded to 20 researchers, with groups from Canada and America and we are looking forward to more joining us. Perhaps we should change our name from Europe to ‘Everywhere’!

Back in 2005, BARGE decided to use a single method with agreed gastrointestinal parameters, for measuring bioaccessibility; the Unified BARGE Method was born. We worked together on a pooled set of samples from various countries with different concentrations of potential toxic elements: arsenic, lead and cadmium. The results of a round robin trial were compared and the group explored the whats and whys for any difference in the data.

Then there was the question of validation: 'How well does our in vitro test compare with in vivo analogues?' Colleagues in France at the University of Lorraine and the French National Institute for Industrial Environment and Risks (INERIS) vivo-vitro validated the UBM measurements using a pig analogue, resulting in a paper in the high-impact journal Environmental Science and Technology (Denys et al., 2012).

The UBM has now been used and cited internationally by a range of science disciplines, including environmental, soil, toxicology, public health, pharmacology and medical sectors and helped inform many risk assessments.

In 2007, the International Standards Organisation published guidance on the application and selection of physiologically based extraction methods to estimate the human bioaccessibility/bioavailability of metals in soil. In 2018, BARGE’s hard work paid off when a new standard was introduced: BS ISO 17924:2018 specified the UBM as the method to use.

From the start of the journey through to the publication of the ISO standard, the BARGE group and researchers around the world have published over 30 peer reviewed papers and articles for non-specialists and given oral and poster presentations at too many conferences for us to remember.

The UBM has been used by researchers and commercial laboratories alike for assessing the human health risk from contaminants in soil, herbal medicines, changing land use, dust, air particulates, mine waste and food. It has been coupled with other laboratory based methods to understand why a contaminant is soluble in the gastro-intestinal environment, not just how much is available to do harm. Bioaccessibility information can be used by environment & health professionals, amongst others, to make better informed decisions on the need for remediation (and its success), land redevelopment and planning applications, and to potentially reduce the cost associated with returning brownfield sites to beneficial use.

In 2009, NERC funded a study on the financial impacts of bioaccessibility testing. It showed the savings achieved by using it at potentially contaminated sites. The results are given in the table. Similar savings will have been made at an increasing number of contaminated sites since the study reported.

Please visit the BARGE website for a flavour of what has been done by the group, and who is involved. Be prepared for some photos of when we all looked a lot younger.

The development, validation and now publication of an ISO standard is an important scientific milestone. But sometimes, when you are in the thick of it, you don’t realise how many people and how long it takes to go from inception to completion. Don’t forget to have a look at BS ISO 17924:2018 via our library.
BARGE bioaccessibility BioAccessibility Research Group of Europe contaminated soil human health potential toxic elements Unified BARGE Method