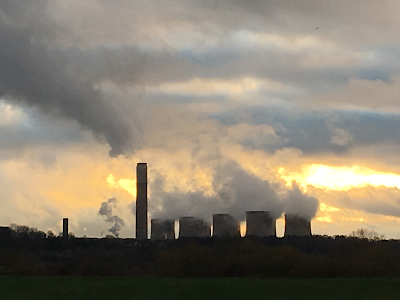 On a recent visit to the spectacular Iron Bridge in Telford Shropshire I was reminded not only of the engineering genius that designed it - Thomas Pritchard - but also the factors that came together to make the bridge possible – a gift of good geography and geology. The bridge, opened in 1781, is widely seen as a symbol of the birth of the industrial revolution in the fact that its construction involved the use of raw materials on an industrial scale – limestone, coal and iron ore. Without these three resources in close proximity to the town of Ironbridge and the bridge itself, this famous construction would simply not be there.

The industrial revolution set the world on a course of the large scale of use of resources including fossil fuels and therefore on the course of a period of emissions that could be called ‘carbonisation’. We now need to decarbonise, but for some of the most challenging parts of decarbonisation, for example industry, transport and domestic heating, good geography and good geology will still matter.

We are witnessing rapid progress in the decarbonisation of electricity production with wind and solar costs dropping rapidly. But electricity is the easy area to decarbonise. Industries that make steel, aluminium, cement and ammonia won’t be so easy to decarbonise because the processes they use produce CO2 emissions directly, and because they use very large amounts of fossil fuels and electric power. Domestic heating is also hard to decarbonise. The UK, for example, uses more energy in heating than for generating electricity and for running its transport system. Around 70% of this energy comes from burning gas producing more than a quarter of the UK’s CO2 emissions.

The decarbonisation of industry, transport and domestic heating sectors needs planning and thought. One solution is to develop geographical clusters that can exploit existing industrial infrastructure together with natural geological resources and other advantages to allow local solutions. An example is the hydrogen economy – the idea that hydrogen can provide a fuel for cells to drive vehicles, heat houses and power industry . Its production may in the longer term be through electrolysis of water using excess (renewable) electricity, but in the short term is more likely to be produced by steam methane reforming (SMR) from natural gas which produces CO2 and hydrogen. The latter is a useful zero carbon fuel, and the former can be used or most likely will need to be disposed of geologically. The key point here is that geological disposal of CO2 can’t be done everywhere, because only specific geologies are suitable. It’s also known that to make the hydrogen economy work, huge amounts of the gas will be needed, and therefore so will large local storage. In most cases, this means geological storage in salt. So geography and geology are again important.

An example is the H21 Leeds City Gate project  which seeks to convert the existing natural gas network in Leeds – used mainly for heat -  to 100% hydrogen. A batch of four SMRs on Teeside will produce the hydrogen needed while the waste CO2 will be captured and disposed of offshore in the southern North Sea. Capture is well established and the technology for disposal has been demonstrated at scale for over twenty years close to the Sleipner Gas Field in deep North Sea rocks. Salt cavern storage in the Tees and York areas will be needed for ‘intra-day’ and ‘intra-seasonal’ swings in demand as heating is turned on and off by consumers. Beyond heating, the availability of low-cost bulk hydrogen in a gas network could revolutionise the potential for hydrogen vehicles in the North East and, via fuel cells, support a decentralised model of combined heat and power and localised power generation.

A similar project, the Liverpool-Manchester Hydrogen Cluster, aims not just at decarbonising domestic heat, but also at decarbonising major industrial gas users in the Liverpool-Manchester area, including in the oil refining, glass manufacturing, food and drink, chemicals and pulp and paper sectors. The main use of gas in these industries is for heat production, whether in furnaces, ovens or combined heat and power (CHP) plants.

The Liverpool-Manchester area also has good geology. The nearby Liverpool Bay ‘complex’ of hydrocarbon fields located in the East Irish Sea off the coast of Merseyside, could be repurposed to provide CO2 storage and these fields are likely to cease production around the time that a cluster concept might be reaching maturity. In the early stages the Liverpool-Manchester Hydrogen Cluster does not envisage H storage in salt because many local process industries operate continuously, so little change in demand is forecast daily or annually so there aren’t big fluctuations in demand. However the area is rich in salt deposits which will be well suited for a larger roll out of hydrogen. The area also benefits from two established pipelines that already transport hydrogen, as well as pre-existing skills and capability related to the production, handling and use of hydrogen.

Perhaps most important is the fact that local ‘energy ecologies’ – collections of energy users and producers - are beginning to work together to realise the need to decarbonise. This added to the local funding arrangements of the Government’s new Industrial Strategy  as part of the ‘place agenda’, will provide the impetus to make decarbonisation happen through carefully targeted government funding along with co-funding from industry to address market failure. The cluster concept underlines the need for industry and government to work together to decarbonise, but also the importance of the distribution of useful rocks, and ultimately the importance of geology in decarbonisation. This is alongside the decarbonisation options that rocks also provide, including geothermal power and cooling and air conditioning, as well as the potential for large scale heat and energy storage.

Back in the Eighteenth Century the impetus to build the Iron Bridge came from local entrepreneurs, including Abraham Darby who first smelted local iron ore with coke made from Coalbrookdale coal in 1709. Darby had agreed to construct the bridge with a budget of £3250 and this was raised by sponsors of the project, mostly early industrialists from surrounding towns and villages. The bridge probably cost about twice that - around £700,000 in today’s money. This was an investment that was part of the ‘carbonisation’ process which was the industrial revolution. The same kind of partnerships are being formed in the new decarbonisation clusters again driven by the opportunities that new technologies can bring to local economies.

If you are interested in the wider geology – energy – climate nexus read my new book:  https://www.elsevier.com/books/energy-and-climate-change/stephenson/978-0-12-812021-7.  Also register for this exciting conference (https://www.geolsoc.org.uk/Lovell19) on the role of geology and decarbonisation.