Learning about cascading hazards at the iRALL School in China...by Jim Whiteley 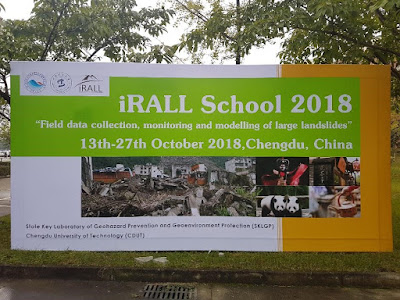 Earlier this year, I wrote about my experiences of attending an interdisciplinary workshop in Mexico, and how these approaches foster a rounded approach to addressing the challenges in communicating risk in earth sciences research. In the field of geohazards, this approach is increasingly becoming adopted due to the concept of “cascading hazards”, or in other words, recognising that when a natural hazard causes a human disaster it often does so as part of a chain of events, rather than as a standalone incident. This is especially true in my field of research; landslides. Landslides are, after all, geological phenomena studied by a wide range of “geoscientists” (read: geologists, geomorphologists, remote sensors, geophysicists, meteorologists, environmental scientists, risk assessors, geotechnical and civil engineers, disaster risk-reduction agencies, the list goes on). Sadly, these natural hazards affect many people across the globe, and we have had several shocking reminders in recent months of how landslides are an inextricable hazard in areas prone to earthquakes and extremes of precipitation.


The iRALL, or the ‘International Research Association on Large Landslides’, is a consortium of researchers from across the world trying to adopt this approach to understanding cascading hazards, with a particular focus on landslides. I was lucky enough to attend the ‘iRALL School 2018: Field data collection, monitoring and modelling of large landslides’ in October this year, hosted by the State Key Laboratory of Geohazard Prevention and Geoenvironment Protection (SKLGP) at Chengdu University of Technology (CDUT), Chengdu, China. The school was attended by over 30 postgraduate and postdoctoral researchers working in fields related to landslide and earthquake research. The diversity of students, both in terms of subjects and origins, was staggering: geotechnical and civil engineers from the UK, landslide specialists from China, soil scientists from Japan, geologists from the Himalaya region, remote sensing researchers from Italy, earthquake engineers from South America, geophysicists from Belgium; and that’s just some of the students! In the two weeks we spent in China, we received presentations from a plethora of global experts, delivering lectures in all aspects of landslide studies, including landslide failure mechanisms, hydrology, geophysics, modelling, earthquake responses, remote sensing, and runout analysis amongst others. Having such a well-structured program of distilled knowledge delivered by these world-class researchers would have been enough, but one of the highlights of the school was the fieldwork attached to the lectures.

﻿﻿ The first four days of the school were spent at SKLGP at CDUT, learning about the cascading hazard chain caused by the 2008 Wenchuan earthquake, another poignant event which demonstrates the interconnectivity of natural hazards. On 12th May 2008, a magnitude 7.9 earthquake occurred in Beichuan County, China’s largest seismic event for over 50 years. The earthquake triggered the immediate destabilisation of more than 60,000 landslides, and affected an area of over 35,000 km2; the largest of these, the Daguangbao landslide, had an estimated volume of 1.2 billion m3 (Huang and Fan, 2013). It is difficult to comprehend numbers on these scales, but here’s an attempt: 35,000 km2 is an area bigger than the Netherlands, and 1.2 billion m3 is the amount of material you would need to fill the O2 Arena in London 430 times over. These comparisons still don’t manage to convey the scale of the devastation of the 2008 Wenchuan earthquake, and so after the first four days in Chengdu, it was time to move three hours north to Beichuan County, to see first-hand the impacts of the earthquake from a decade ago. We would spend the next ten days here, continuing a series of excellent lectures punctuated with visits to the field to see and study the landscape features that we were learning about in the classroom.

The most sobering memorial of the 2008 Wenchuan earthquake is the ‘Beichuan Earthquake Historic Site’, comprising the stabilised remains of collapsed and partially-collapsed buildings of the town of Old Beichuan. This town was situated close to the epicentre of the Wenchuan earthquake, and consequently suffered huge damage during the shaking, as well as being impacted by two large landslides which buried buildings in the town; one of these landslides buried a school with over 600 students and teachers inside. Today, a single basketball hoop in the corner of a buried playground is all that identifies it as once being a school. In total, around 20,000 people died in a town with a population of 30,000. Earth science is an applied field of study, and as such, researchers are often more aware of the impact of their research on the public than in some other areas of science. Despite this, we don’t always come this close to the devastation that justifies the importance of our research in the first place.

It may be a cliché, but seeing is believing, and the iRALL School provided many opportunities to see the lasting impacts of large slope failures, both to society and the landscape. The risk of debris flows resulting from the blocking of rivers by landslides (a further step in the cascading hazard chain surrounding earthquakes and landslides) continues to be a hazard threatening people in Beichuan County today. Debris flow check-dams installed after the 2008 Wenchuan earthquake are still being constantly maintained or replaced to provide protection to vulnerable river valleys, and the risk of reactivation of landslides in a seismically active area is always present. But this is why organisations such as the iRALL, and their activities such as the iRALL School are so important; it is near impossible to gain a true understanding of the impact of cascading hazards without bringing the classroom and the field together. The same is true when trying to work on solutions to lessen the impact of these cascading hazard chains. It is only by collaborating with people from a broad range of backgrounds, skills and experiences can we expect to come up with effective solutions that are more than the sum of their parts.

Jim Whiteley is a PhD student funded through the BGS University Funding Initiative (BUFI). The aim of BUFI is to encourage and fund science at the PhD level. At present there are around 130 PhD students who are based at about 35 UK universities and research institutes. BUFI do not fund applications from individuals.
BUFI geohazards hazards iRALL Jim Whiteley landslides PHD Wenchian earthquake