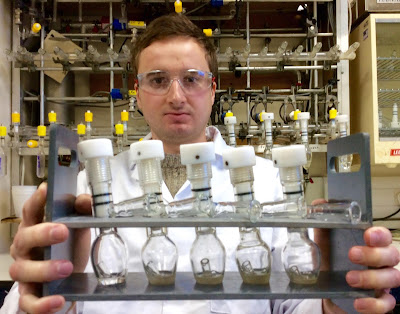 Dr Jonathan Dean is a Lecturer in Physical Geography at the University of Hull. Here he draws on stable isotope work carried out with Prof Melanie Leng at the Stable Isotope Facility at the British Geological Survey to investigate the links between climate and humans…

Why did some Homo sapiens, after evolving in eastern Africa and living there for tens of thousands of years, decide it was time to up sticks and move to Asia? Why did cities and vast empires in the Middle East collapse suddenly around 4,000 years ago, and again 3,000 years ago? People have often proposed a link between climate change and the course of human history, but to test these theories we need to know exactly how the climate changed back through time. That’s where people like me come in. My job is to work out how climate changed in the past. Because there are no meteorological records going back more than a few hundred years, we have to come up with clever ways to reconstruct past climate. I use lakes as a historical rain gauge. In some lakes, carbonate – which is like the limescale in your kettle at home – forms every year in the surface waters. In this carbonate, there are different types of oxygen, and the ratio of one type of oxygen to another varies depending on factors such as how deep or shallow the lake was at the time it formed. This carbonate then falls through the water to the lake bed and is locked away as an archive of lake level change…until scientists come along. We drill into the sediments to take cores. We then analyse the ratio of one type of oxygen to another at different points back through time from the carbonates in these sediments, and from that can reconstruct changes in lake level, and hence climate changes between wet and dry, back through time.

Let’s consider two examples of how climate change might have changed the course of human history. Firstly, why did our species, Homo sapiens, leave Africa after evolving there? Scientists have found evidence of Homo sapiens in the Middle East as far back as 130,000 years ago. However, other researchers have analysed the DNA of modern humans and concluded that modern non-Africans are likely to be descended from people who left Africa via Egypt around 60,000 years ago, suggesting the people who left 130,000 years ago died out before they could successfully populate the rest of the world. But why did Homo sapiens leave Africa? Maybe climate change played a role. We have used sediments taken from an old lake on the border between Ethiopia and Kenya. We showed in a paper that has just been published that there was a climate shift in eastern Africa at the time the successful dispersals out of Africa occurred around 60,000 years ago – the climate was changing from being very variable with multiple fluctuations between wetter and drier conditions, to a more stable climate where there was less change. During the more variable times, it was difficult for Homo sapiens, and only those who adapted to each climate change survived. This led to natural selection for the most flexible, highly skilled individuals and populations. When the climate then became more stable, it was easier for Homo sapiens to survive so populations increased. This led to pressure, as more and more humans tried to survive on the food and water resources of eastern Africa. This may have therefore pushed some people out of the region in order to try to find new lands to live on, and because of the natural selection during the times of variable climate they had the skills required to migrate out of Africa.

Our second example brings us much closer to the present day. Between the time of the migration out of Africa and 5,000 years ago, humans had started playing musical instruments, developed farming and invented the wheel. But at approximately 4,000 years ago and again at 3,000 years ago it seems big civilisations ‘collapsed’ – the archaeological evidence suggests they either went into decline or ceased to exist all together. Again, climate change has been used to help account for these sudden events. A drought lasting several hundred years has been identified ~4,000 years ago in climate records from lakes in the Middle East – for example in our record from a Turkish lake that was published in a paper in 2015. In Egypt, the Nile floods failed, leading to famine and political upheaval, and they even stopped building pyramids for a few hundred years. Around 3,000 years ago we identify another drought, at the time the Hittites, who lived in central Turkey, went into decline. Nowadays in central Turkey, there is only roughly 300 mm of precipitation a year and even with modern technology agriculture is difficult. But at the times of these ‘collapses’ we have shown it would have been even drier. These droughts may have weakened civilisations and combined with civil conflict, invasions and population pressures to cause the ‘collapses’. We will never know for sure what killed off these civilisations, but what we can say is that it would have become much more difficult to grow crops, and hence for people to feed themselves, during these droughts.

Therefore, climate seems to have been a major force in shaping the course of human history – from explaining the migration of early Homo sapiens out of Africa, to contributing to the collapse of civilisations. There are important lessons for the future here. The Middle East is likely to bear the brunt of climate change this century, with drier conditions due to falling precipitation and increased summer evaporation. Eastern African is predicted to see some large climate changes too. Already politically volatile regions, fighting over water resources is likely to intensify conflicts this century. In the Middle East, it may become as dry as it was at the times of the droughts 4,000 and 3,000 years ago, and the question is whether modern technology and politics will prevent the ‘collapses’ of civilisations that we saw in the past.


Dr Jonathan Dean is a Lecturer in Physical Geography at the University of Hull, he works with Prof Melanie Leng at the Stable Isotope Facility at the British Geological Survey to investigate the links between climate and humans…