on July 04, 2018
The climate is changing.  We know this.  And while many dedicated scientists, researchers, activists, politicians and people in their own homes are trying to understand, tackle and find ways we can be more resilient to it, we have also been looking at how the changing climate may affect geohazards such as landslides, sinkholes and shrinking and swelling clays.

Will more landslides happen?  Will previously stable landslides reactivate?  Will there be more sinkholes appearing?  Will the London buildings subject to the shrinking and swelling of underlying clay suffer even more damage in the future?

What about all the buildings, roads, railways, utilities and other assets on and around these hazards?  How could they be affected?  It’s perfectly sensible to wonder about your own home and surrounding area, but what about those assets that we all love and identify our location by?  Such a place might be your local stately home or another famous monument like a castle or a river valley teaming with wildlife.  These sites are collectively known as Cultural Heritage sites.  In fact, these sites are being celebrated right now as part of the European Year of Cultural Heritage.  How might these places be affected?  Does anyone know?  Is anyone thinking about that?

Well, in short, yes.  Yes we are.  And we’ve been to the UNESCO headquarters in Paris to talk about it. 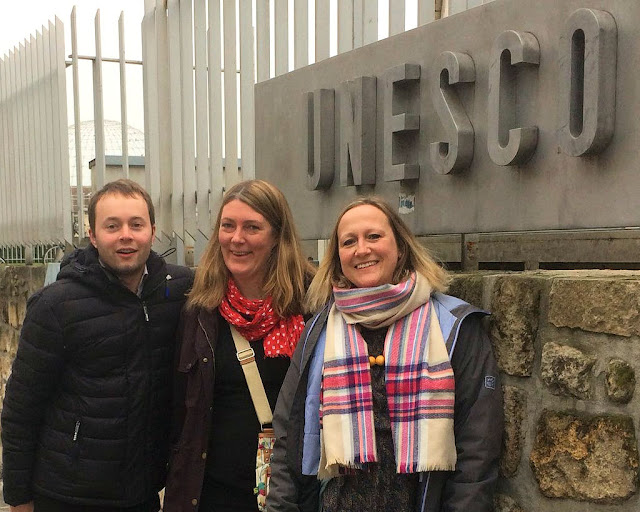 (Left to right) Alessandro Novellino, Emma Bee and Anna Harrison at the UNESCO headquarters in Paris for the PROTHEGO project meeting

Scientists (pictured) at the BGS have been working with European partners from Italy, Cyprus and Spain on the Protection of European Cultural Heritage from Geohazards (PROTHEGO) project.  The meeting at UNESCO presented the findings from this work.

Emma Bee, PROTHEGO project manager at BGS explained the aims: “Focusing on selected pilot sites on the UNESCO’s World Heritage List, the PROTHEGO project identifies geohazards that may impact the sites and then develops ways of detecting and monitoring them”.

Such geohazards may include volcanoes, earthquakes, landslides or sinkholes as well as flooding from rivers or groundwater, or shrinking and swelling clays.  Emma added: “By understanding the likely threats from geohazards, the owners of the heritage sites can adapt their management practices to reduce potential damage to these culturally important sites, helping to protect them for future generations”.

Part of the project was also to create the PROTHEGO Map Viewer.  For the first time, you can now view hazard fact sheets for World Heritage Sites.

How do we monitor geohazards? The Eye in the Sky

Satellites whirl round and round us all the time.  As they’re doing this, they’re streaming radar images of our planet back to us.  Some of the data are freely available and allow us to monitor large areas for small movements in objects that reflect the radar well (such as buildings and roads).  For the full title, this technology is called Interferometric Synthetic Aperture Radar (InSAR) analysis and can detect movement accurate to around one millimetre.

By combining InSAR analysis with information from geological data and expertise, any geohazards affecting heritage properties can be detected, monitored and understood.

Our test site: the Derwent Valley

At least one site in each PROTHEGO project partners’ country was selected.  For the UK, this is the Derwent Valley Mills World Heritage Site.

This site is near Derby in the East Midlands and is on the southern edge of the Pennines.  It is a largely rural, industrial landscape containing a number of historic cotton and silk mills, watercourses that powered them, railways, housing and other facilities developed for the mill-worker communities during the 18th and 19th centuries.  You can find out more about this site on the Derwent Valley Mills website.

The upshot?  Landslides and flooding…

The Derwent Valley Mills World Heritage Site is vulnerable to certain geohazards due to its geographical setting and the close location of buildings to the river.

We used information from our National Landslide Database and landslide susceptibility maps, InSAR analysis, expertise in engineering geology and geohazards, and fieldwork and we were able to identify two active landslides in Starkholmes and Ambergate that could affect the Derwent Valley.  Fortunately, they are not a threat to the historic buildings in the area.  The type of geology means that sinkholes and shrinking and swelling clays are unlikely to be present in this location.

Flooding simulations based on different climate change scenarios in the Derwent Valley catchment area also identify the potential for flooding, mainly over the west riverbank.

We can also expect to see an increase in these geohazards in the coming decades due to changes in climate.

The method we have established means that this approach could be rolled out to other World Heritage Sites or, indeed, other Cultural Heritage sites where owners need to assess the long-term stability.

For more information about this project or any of the scientific methods used, please contact Emma Bee.

PROTHEGO is a collaborative research project funded in the framework of the Joint Programming Initiative on Cultural Heritage and Global Change (JPICH) - Heritage Plus in 2015–2018.