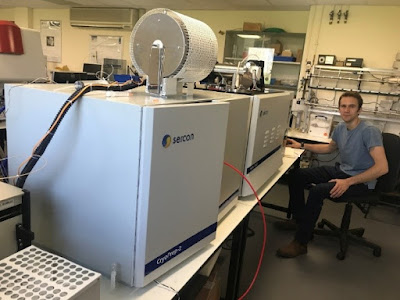 A recent collaborative venture between the stable isotope facility at the BGS and UK based mass spectrometer company Sercon Ltd has resulted in the development of the UK’s first automated system for the analysis of both hydrogen and carbon isotopes in methane. Here Andi Smith tells a bit more about the new instrument and potential applications…

Understanding subsurface methane dynamics is something that is going to become increasingly important to several areas of BGS, especially with ongoing developments with UKGEOs and groundwater monitoring projects in the Vale of Pickering, North Yorkshire and Fylde, Lancashire. One of the most promising tracers for understanding methane sources in groundwater is duel isotope analysis of the dissolved gas. Most surface methane is produced by methanogenic bacteria within the near subsurface, large isotope fractionations are associated with this process lead to very negative isotope values for both carbon and hydrogen (δ13C –70 to –110‰; δ2H –160 to –340‰).

Thermogenically produced methane on the other hand is formed by the thermal decomposition of kerogen, a process which is normally associated with isotope values of δ13C between –20 to –50‰ and δ2H between –110‰ to –250‰. These differences allow us to provenance where methane collected during monitoring projects was formed and start to understand potential migration pathways within the subsurface.

Whilst this dual isotope tracer technique has been undertaken many years, traditional systems require very labour intensive/ expensive sample clean up and preparation methods. This has meant that the number of samples that can be analysed has been very limited for most studies. To overcome this limitation staff at the stable isotope facility and Sercon Ltd embarked on a joint innovation project to develop a sample preparation and mass spectrometer system which is capable of running far greater numbers of samples at a reduced cost.

The developed instrument is now on site at the BGS and is being put through its paces. Once the system is fully functional it will be able to analyse large numbers of samples at very high precision. This will be ideal for baseline investigations at a number of BGS research sites and should help us identify if subsurface activities have any impact on methane release into aquifers.

There are many other potential applications for this instrument, if you think you may have an interesting application for this technique get in contact with me andrews@bgs.ac.uk.