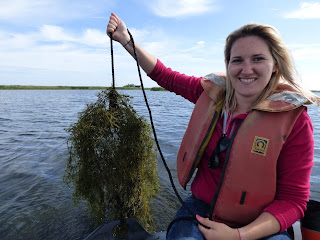 Ostracods, small animals which live in all aquatic environments, build shells (see image) that reflect the temperature and salinity of the water in which they formed. When the shells fossilise they can be used to understand past conditions of the lake or climate at that time. The ratio of certain trace elements (magnesium and strontium) to calcium (Sr/Ca and Mg/Ca) and the oxygen and carbon isotopes (δ18O and δ13C) within the shell is used to relate to the water conditions. The magnesium, strontium and oxygen isotopes relate to the past temperature and salinity of the water; carbon isotopes relate to the productivity of the lake. Here PhD student Lucy Roberts from UCL tells about her research on improving cleaning methodologies…

To obtain the most accurate reconstructions of past conditions, the ostracod shells must be cleaned of mud and/or remaining parts of their internal limbs. There are, however, a range of methods used across different laboratories. All the methods used have been proven to effectively clean the shells, but until now it has not been clear if the methods are also removing parts of the shell surface and causing an alteration to the trace element and/or isotope signal that is preserved in the shell.

Alongside the BGS stable isotope laboratories, we designed an experiment to test this using a range of cleaning methods. For isotopic work, cleaning was performed using chemical oxidation, vacuum roasting and plasma ashing; for trace element work we used sonication, chemical oxidation and reductive cleaning. These methods were compared to simple ‘manual’ cleaning using a paint brush to remove visible material. Cleaning methods were compared by undertaking analyses on a single ostracod carapace (two separate ‘valves’, similar to a mussel, which together form the ‘shell’); in modern ostracods, the two valves should have identical trace element and isotope ratios. One valve was cleaned using one of the methods above, and the other was manually cleaned using a paintbrush. Any difference between the two valves after cleaning could be assigned to the effect of the treatment method.

To establish a universal method which allows comparison between reconstructions, we recommend sonication for trace element analysis and oxidation by hydrogen peroxide for stable isotope analysis. We believe these methods are effective at cleaning the shells, but do not significantly alter the signal preserved in the shell.

For more information on the study and the recommended methods, the open access paper is reference is: Roberts, L.R., Holmes, J.A., Leng, M.J., Sloane, H.J., Horne, D.J. Effects of cleaning methods upon preservation of stable isotopes and trace elements in ostracod shells: Implications for palaeoenvironmental reconstruction. Quaternary Science Reviews, 189, 197-209. The paper can be download for free here.