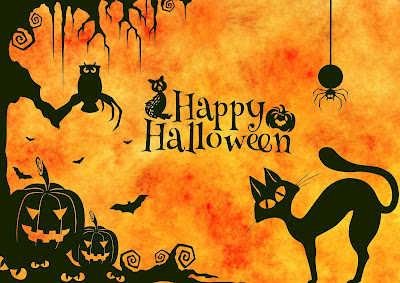 The island of Ireland is known for its ghost stories, with every nook and cranny of the island having a tale or two to tell. Halloween is one of our favourite times of year; a great excuse to dress up, have a bit of fun and generally make fools out of ourselves. It is known for its Celtic origins, being synonymous with the festival of Samhain (pronounced SAH-win), marking the end of the harvest season and the beginning of the darker half of the year. It was a time when cattle were brought in for the winter, livestock were slaughtered and bonfires were lit to fend off evil spirits. It was also said to be a time when the boundary between this world and the 'otherworld' were blurred so the souls of the dead could come back for a visit.

In Northern Ireland, there are a huge amount of spooky stories, many of which have been passed down from generation to generation. Over the years they will have been exaggerated and added to, all with the intention of scaring the life out of everyone listening, and there is no better night to tell these than on Halloween. Many of the stories have their origins in the diverse landscapes of Northern Ireland, and in some cases these were a way of helping to understand geological processes before science had helped to provide the answer. Here's just a few of the best ones and please let us know if you can think of any more.

Our first port of call is Benaughlin in Co. Fermanagh. Translated literally as 'peak of the speaking horse' this limestone hill is renowned locally for the legend of Donn Binn Maguire. Being one of the ancient Kings of Fermanagh, Donn Binn Maguire used to go hunting across his lands and on one particular evening he caught sight of a beautiful white stallion. After giving chase, Donn Binn Maguire found that he was completely lost, and before he knew it he had chased the horse into a cave, of which there were many in west Fermanagh. The horse had been a lure to the underworld of the fairies, known to most Irish people as 'the good folk', a strange kind of dangerous supernatural being that was not to be messed with. Donn Binn Maguire was held captive in the underworld where he became undead, being nether dead or alive, and was allowed to go back to the real world on certain nights of the year including Halloween, to bring back a human being for company. It is still a tradition for people to hang a branch of mountain ash above the door to ward off Donn Binn Maguire who may try and take away the prettiest girl, the best scholar or the strongest athlete. Thanks to the Lower Carboniferous limestone geology, there are hundreds of caves in Co. Fermanagh, many of which are steeped in superstition.

Located near the Co. Antrim town of Glenarm , the White Lady is a relict sea stack carved out of Cretaceous limestone (more commonly known as chalk) by the action of the sea. At one time, this sea stack would have been surrounded by the sea, but relative lowering of sea level has left it stranded and is one of many similar features including relict sea caves that can be seen all along this coast. The White Lady is so called because it resembles a female figure as you approach and it shares the same name as the ghost that supposedly haunts the nearby Ballygally Castle. Legend has it that the castle is haunted by Lady Isobel Shaw who leapt to her death from a window after her husband locked her in her room because she couldn't produce a male heir.

Loughareema, or the Vanishing Lake, in Co. Antrim has been a source of puzzlement for decades. To scientists, Loughareema is regarded as one of Northern Ireland's most enigmatic geological sites. This ephemeral or temporary lake lives up to its title as the vanishing lake as it may be empty of water one day and be completely full the next. To most other people however, Loughareema is best known for its ghost stories. Local legend tells us of the drowning of a coach and horses in the 19th century as they tried to cross the lake when it was full. Bizarrely, a road had been built through the lake when it was empty so in the dead of night it was impossible to tell if water levels were high or low. It is said that on nights when the lake is full, a phantom ghost haunts the shoreline, and together with the prospect of the sight of a kelpie, or water-ghoul, Loughareema is not short of a story.

Slieve Gullion in Co. Armagh is part of the Slieve Gullion Complex, made up of three distinct units of igneous rock that were intruded during the Palaeogene period. Slieve Gullion is made up of layers of igneous rock of varying chemistry which adds to the geological interest of the region. The complex geological history of this area on the border between Northern Ireland and the Republic of Ireland has led to a diverse range of strategic landscapes that have been the location for many historical battles. They are also the source of many myths and legends including that of Calliagh Bera, a witch-like creature who took the form of an old woman or 'hag'. One of the best-known stories involves the most famous of all Irish legends, the giant Finn McCool. Finn McCool was said to be captivated by a beautiful young woman on Slieve Gullion called Calliagh Berra. She claimed to have lost her gold ring in the nearby lake and asked Finn to retrieve it for her. He searched for the ring and eventually found it, only to discover that Calliagh Berra had put a spell on the lake and that he had been transformed into a wizened old man. Finn’s men later found Calliagh Berra and managed to persuade her to change him back, but even though he returned to his former self, his hair remained grey. The lake on Slieve Gullion still bears the name of Calliagh Bera.

Lough Neagh is the largest lake by area in the UK and Ireland with five of the six counties of Northern Ireland having shores on the lake. The depression occupied by the lake formed during the Palaeogene period as a result of crustal stretching and thinning associated with the opening of the North Atlantic Ocean. It is known as a pull-apart basin where subsidence generates space for the deposition of sediments. However, over the generations there have been many alternative theories as to how Lough Neagh formed. One such story includes a well that stood in the centre of the area where Lough Neagh is now found. The waters were supposed to be under the influence of the fairies and were looked after by a local witch. One day the witch forgot to close the gate through which the water flowed and it overflowed causing her to drown and the water that escaped gave rise to Lough Neagh. An alternative story is associated once again with Finn McCool who is said to have scooped up a chunk of earth too throw at his rival Scottish giant. The chunk of earth landed in the Irish Sea forming the Isle of Man, and the crater left behind is now Lough Neagh!

There are hundreds if not thousands of holy wells dotted across the island of Ireland. Most of these are natural springs, present in abundance due to the dominance of Carboniferous limestone geology. A great number of these springs were given links to Saints after Christianity reached Ireland, but prior to that, many of these would have had spiritual importance for pagan rituals, as water seemingly appeared from nowhere. A lot of these sites were said to be 'fairy wells' and were said to be the homes of fairies so were looked after for fear of angering the 'good people'. Around the edge of the Belfast hills there are records of an abundance of 'fairy wells' and many of these natural springs have now been covered over. There are however stories of strange goings-on including apparitions close to the site of where the 'fairy wells' were located. After all, if you mess with the fairies then you will live to regret it!
#GSNI70 Ballygally Belfast Hills Benaughlin Calliagh Bera fairies ghosts Glenarm GSNI Halloween Lough Neagh Loughareema Northern Ireland Slieve Gullion witches zombies