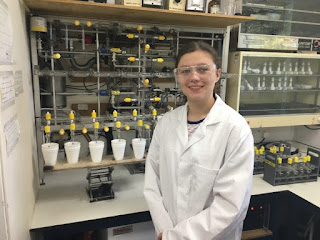 Hi, my name is Laura Wainman and I am a sixth form student from Rushcliffe School. I have just completed my work experience week in the Stable Isotope Facility at the British Geological Survey. BGS is a world renowned geoscience centre with its headquarters here in Keyworth, Nottingham. A great variety of research is conducted at BGS, from monitoring and forecasting volcanic eruptions and earthquakes to studying local and global environments.  Along with another student James, I have spent my week learning how, from measuring the isotopes of oxygen and carbon, the climate and environmental conditions from thousands of years ago can be deduced.

On Day 1 (after the health and safety induction) we began our week long experiment to extract Carbon Dioxide (CO2) gas from Calcium Carbonate (CaCO3) samples which could then be analysed in a mass spectrometer. The first stage in this experiment was to weigh out our carbonate samples into small test tubes, drop these into larger glass vials containing phosphoric acid and then attach these to the vacuum pump (see above photo) so that overnight all the air could be removed. We then allowed the phosphoric acid and sample to mix by shaking the larger vessel and leaving it in a 25.2oC water bath overnight so that the reaction could be fully completed and all at the same temperature. The next day we then had to extract the CO2 gas which had been formed by the reaction. To do this we reattached the vessel to the vacuum pump and then used liquid nitrogen (which was at -196oC) to sublime the CO2 whilst we removed any other remaining gases.  The gas was also passed through an acetone water trap to remove any water which would have later damaged the mass spectrometer.

Once all of our samples had been extracted we then attached them to the mass spectrometer and left them to be analysed. It was especially interesting to learn in detail how the mass spectrometers work and see all of the components up close. I had not previously known about the use of a reference gas or the requirements of different machines to analyse different isotopes – the ones we were using looked specifically at Carbon-13 and Oxygen-18. On our final day we were able to collect and analyse our results, from the graphs we plotted we were able to see that the loch from which the samples were collected had gradually changed from a freshwater environment to a marine one. This was due to the increase in sea levels at the end of the last glacial period 12,000 years ago.

Whilst we were waiting for our main experiment to progress we were also introduced to many other areas of the lab. This included using microbalances, tweezers and mini spatulas to weigh out very very small amounts (70-150mg) of one of the BGS internal standards of freeze dried broccoli! Whilst frustrating at times, this has certainly given me a much greater appreciation of the meticulous and painstaking preparation of samples required to conduct good research.

We also helped prepare rock sediment samples from Vietnam and Tanzania for analysis, this involved daily emptying and refilling of (many) beakers in order to wash the samples of debris and dirt. Once the samples had dried out we then scraped them out of the beakers and used a mortar and pestle to grind them into a fine powder before depositing them into small vials ready to be analysed.
angela lamb geochemistry mass spectrometers Stable Isotope Facility work experience