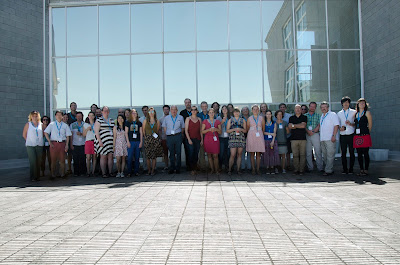 In June 2017, the ninth meeting of the Isotopes in Biogenic Silica (IBiS) working group met in Blanes, Spain. The meeting was arranged with the aim of those interested in "silica, silicon and isotopes" to meet to discuss recent advances and discoveries in:

The meeting was organised by the Centro de Estudios Avanzados de Blanes (CEAB-CSIC) and attracted around 50 researchers from around the world. It was clear from the meeting that the use of silica in biotechnology (mainly as a carrier for other elements that need to be distributed in tiny quantities) is a huge growth area. Other important advances are being made around the signal retained in the oxygen and silica isotopes within the biogenic silica structure, as well as the advancements in analytical protocols and laboratory inter-calibration exercises.

Blanes, the gateway to the Costa Brava, was a relaxed setting for a conference. Although it is a popular tourist town, due to its amazing beach front, it was still early in the season so very quiet. Of note to geologists is the Sa Palomera, a rocky promontory that protrudes into the sea, made of fairly coarse-grained granite (which accounts for the wide, golden beaches).

Please contact Melanie Leng if you are interested in all aspects of the geochemistry of biogenic silica and would like to join the working group. We hope the next meeting to be in Northern Europe in June 2019.