Age of Grit and Lime: the Bedrock of Derbyshire...by Clive Mitchell 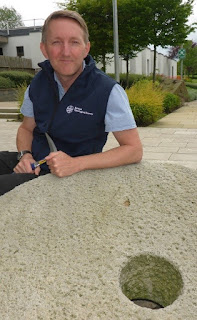 Clive Mitchell is Head of Communications for the British Geological Survey (BGS) responsible for communicating the science of the BGS. He is also a senior industrial minerals specialist, secretary of the Extractive Industry Geology conference, a Chartered Geologist, responsible for MineralsUK website and a member of the British Standards Institute (BSI) technical committee for aggregate test methods. This blog was originally written for the Institute of Quarrying (IQ) Quarry Garden project, on display at the RHS Chatsworth Flower Show in celebration of 100 years of the IQ.

My thoughts of Derbyshire are usually full of the walking routes I’ve followed across the Peak District. As a geologist, the contrast evident in the geology of the White and Dark Peaks is stark. The seemingly peaceful, verdant green pastures, drystone walled farmland of the limestone dales surrounded by the brooding heathland moors and the dramatic sheer-sided edges of the gritstone uplands.

For the keen observer, the evidence of past industry and human ingenuity is all around, often overgrown and gently merging back into the landscape. My walks often take me along canal tow paths and mineral railway lines, through rocky cuttings, dripping tunnels and steep inclines, which provided the mills, factories, stone quarries, lime kilns and farmers with access to markets in the surrounding cities. It’s hard to envisage the roar of the engines, the huge volume of material and the large number of people that must have passed along now largely tranquil routes such as the High Peak, Tissington or Monsal trails.


The limestone and gritstone forming the Peak District are sedimentary rocks that have been a source of valuable materials since the days of Romans lead mining. Alongside the Coal Measures in the east of the county, these rocks were deposited in the Carboniferous over 340 million years ago and are exposed in the north, east and part of the south of Derbyshire. The younger geology of north-east Derbyshire includes high quality Permian-age dolomite (‘Magnesian Limestone’) that is the raw material for magnesia refractories and was in the past used as a valuable ‘freestone’ to build the Houses of Parliament. In the south of the county, sand and gravel is produced from the Triassic Sherwood Sandstone and the river gravels in the Trent valley. The modern day focus of the minerals industry in Derbyshire is the quarrying of construction minerals, particularly limestone, sand and gravel, brick clay and sandstones, and also industrial minerals including industrial grade limestone and dolomite.

Some of my favourite places in Derbyshire are the ‘Blue John’ caverns at the western end of the Hope Valley near Castleton, where the fabulous purple fluorspar is still mined, although on a very small scale. Fluorspar is one of the few minerals to be worked on an industrial scale within the Peak District National Park (for example, near Stoney Middleton) as it is a considered a resource of national strategic importance. Some superb examples of Blue John used in table tops, inlays and vases can be seen in the mineral collection in Chatsworth House.

Chatsworth is a fitting location for the Institute of Quarrying (IQ) Quarry Garden at the RHS Chatsworth Flower Show this year (7-11 June 2017). As with many buildings in the Peak District, it is built with locally quarried stone. The main house is built using Ashover Grit. This is an attractive honey coloured sandstone with Liesegang rings (formed by iron staining) and was quarried a few miles away on the hills overlooking Bakewell, a stone’s throw from the Monsal trail. The Ashover Grit also forms the bedrock below Chatsworth House itself and was recently quarried at Burntwood Quarry. This quarry, located on the Chatsworth Estate, was reopened 100 years after it was last worked and was totally overgrown. The stone produced is part of the current restoration work being carried out at Chatsworth House and was also incorporated into the IQ Quarry Garden.