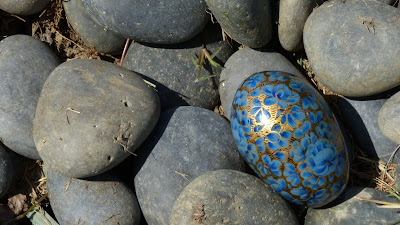 As a geologist working a great deal with the public, I pride myself in being able to bring geology into absolutely everything. After all, geology is literally the foundation of everything! But when it came to writing a blog on the links between geology and Easter though, I have to admit that it wasn't as easy as it first appeared. So, I think you'll agree that some of these links between Easter and geology are somewhat tenuous, but it's all a bit of fun and it will hopefully provide a little bit of light entertainment after all of those Easter eggs.

Located in the SE Pacific Ocean, Easter Island is a remote and isolated island about 3,700km west of Chile. It is famed for its massive stone carvings of human-like figures known as Moai (more on those later) but it's story goes back much further. The island is an amalgamation of three overlapping shield volcanoes that erupted between about 780,000 and 110,000 years ago, and is part of a 2,500km-long chain of underwater volcanoes called the Easter-Salas y Gomez Seamount Chain.

Rano Raruku is just one of several volcanic craters found on Easter Island (or Rapa Nui as it is also known). It is from this location that the majority of the famous stone carvings originate, and where the tuff (essentially consolidated volcanic ash) was quarried and sculpted before being transported elsewhere. Only around 50 of the 900 statues were carved from other rocks, namely basalt, trachyte and scoria, all of which were available locally. Rano Raraku is known as the Moai quarry and there are still nearly 400 statues remaining.

So it's not a real Easter egg, or even a regular egg but 'Embed Google and Geology' (or EGG for short) allows you to use BGS data to create a custom geology or earthquakes map of the UK and embed it in your own website. Advanced users can even customise their maps by changing the size, show surface geology or earthquakes, change to map from satellite to road maps, and change the centre and map zoom. This neat, self-contained packaged is an easy way to add geology information to your website.

A loosely defined area to the east of Ross in the Highlands, Scotland, Easter Ross has been the focus of many geological papers and other publications. Some of its best known geology is its Middle Devonian sandstone that has been used in the façade of the James Hutton Building at the BGS headquarters in Keyworth (and part of the Geological Walk). The building incorporates a 'feature wall' with a stylized representation of Siccar Point, the location with which James Hutton is synonymous. Instead of the Upper Devonian Stratheden Group sandstones found at the famous locality in Berwickshire though, the 'feature wall' uses sandstone from the Black Isle Sandstone Group, from Balaldie Quarry, Fearn, in Easter Ross.

I couldn't let an Easter geology blog go without mentioning some form of Easter 'Bunny'. In this case, it is Rabbit Ears Peak, in the Rocky Mountains of northern Colorado, USA. The name comes from the distinctive double towers that resemble rabbit ears made up of volcanic material that erupted around 30 million years ago. Subsequent erosion has sculpted the peak into the 'rabbit ears' that you can see today. Unfortunately, I have no images that I can freely share but if you want to see what Rabbit Ears Peak looks like then have a look here.

And finally, we couldn't finish off with at least some mention of chocolate. If you are left with a plethora of Easter eggs then instead of making the usual rice-krispie buns then why not use them to learn about the chocolate rock cycle, all thanks to this great resource produced by the Geological Society. You can find out about sedimentary, igneous, and metamorphic rocks all through the medium of chocolate; educational and edible!
bunny chocolate Easter Easter Island Easter Plate Easter Ross eggs James Hutton Moai rabbit