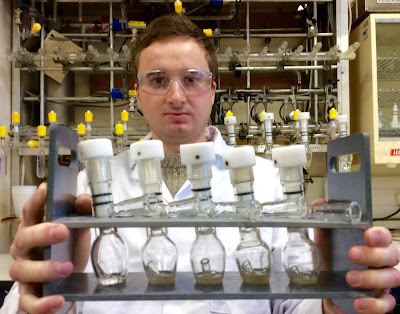 At the end of February, Jonathan Dean will bid farewell to the Stable Isotope Facility at the British Geological Survey to start a lectureship at the University of Hull, here he looks back on his time in Keyworth...

I first came to the Stable Isotope Facility (part of the Centre for Environmental Geochemistry at the BGS) in 2010 as an undergraduate from the University of Nottingham to get experience of working in a laboratory. I subsequently moved on to do a PhD at Nottingham and over the next 3 years I was regularly back at BGS, analysing lake sediments for geochemistry from Turkey. We've now published a number of papers on the isotope work I undertook on those sediments, which we used to reconstruct how the climate of the Eastern Mediterranean region had changed between wet and dry over the past 13,000 years (See Dean et al. 2015a;  Dean et al. 2015b; Dean et al. 2015c).

In 2014, and after I completed my PhD, I started working at BGS as a 'Stable Isotope Apprentice', where I received training in a large variety of lab tasks including the analysis of organic matter in resource type studies for carbon isotopes and the analysis of oxygen isotopes in carbonates for palaeoclimate research. Following my training I was in an ideal position to apply for and obtain a 2 year post-doctoral post associated on a NERC funded grant based at BGS. For the last 2 years I have been analysing the chemistry of lake sediments from Ethiopia in order to reconstruct changes between wet and dry climate over the past several hundred thousand years in eastern Africa (see my update in 2015 on Geoblogy) and link these changes to the movement of hominins out of Africa. The climax of the project came in January this year when over 60 scientists from around the world gathered at Arizona State University in Phoenix to discuss progress of this international effort. We are aiming to test our hypothesis that changes in climate influenced the history of Homo sapiens and our predecessor species. We're hoping to start publishing our results within the next year, so watch this space!

Overall, what an amazing few years it has been, the Stable Isotope Facility at the British Geological Survey has been a great place to work (and get training) and I hope to continue research collaborations for years to come! I am now looking forward to working as a lecturer in Physical Geography at the University of Hull. Thanks to Chris Kendrick, Carol Arrowsmith, Hilary Sloane and Melanie Leng at the BGS who have supported me through the last 7 years.