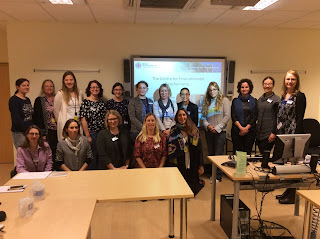 On the 16th December 2016 the Centre for Environmental Geochemistry (CEG) held a Networking event between key female geoscience researchers the British Geological Survey (BGS) and the University of Nottingham (UoN). The main impetus behind the event was to encourage collaboration between Anne McLaren Research Fellows of the UoN from the Schools of Biosciences, Geography, Chemistry and Faculty of Engineering, with other female researchers at the BGS. The invitation was extended to other early and mid-career researchers at the School of Archaeology, due to the strong research linkages with the Stable Isotope Facility at BGS.

Close to 20 female scientists from the BGS and UoN attended the event. Dr Virginia (Ginnie) Panizzo, who organised the event, kicked off the workshop before introducing Prof Melanie Leng (the Director of the CEG) who provided an overall introduction to the CEG.

Delegates were given the opportunity to provide a brief introduction to their analytical specialities and research interests to the rest of the group, so as to facilitate discussions throughout the day. This proved a great success for many inter-disciplinary dialogues. Networking continued during and after lunch in informal break out groups before a tour of the BGS laboratories closed the day.

All delegates involved found it an insightful event and a great chance to meet other like-minded female geoscientists at the BGS and UoN. We hope that it will serve as a worthwhile kick-start to other such events for geoscientists alike between the two Institutions.

Please contact Dr Ginnie Panizzo if you are interested in future women in geochemistry networking. Ginnie is an Anne McLaren Research Fellow of the UoN and Visiting Research Associate at the BGS.