The Rio 2016 Summer Olympics are nearly upon us when more than 10,500 athletes from 206 countries will take part in 306 events in 28 Olympic sports. The event has come a long way since the first Olympic Games held in the sanctuary of Zeus at Olympia, Greece in 776BC. It is this legacy that got me thinking about all the other places around the world that share their name with this behemoth of sporting achievement. For most of us, we have more chance of visiting one of these places than actually taking part in the Olympic Games!


The word Olympic literally means 'of Olympus or 'of Olympia' with Olympus being famous in mythology as the home of the Greek gods, so it's no wonder that there are a number of locations across the world (and beyond) that have chosen to share that name. We've decided to have a look at these places and see if their geological heritage meets the 'gold medal' standard. 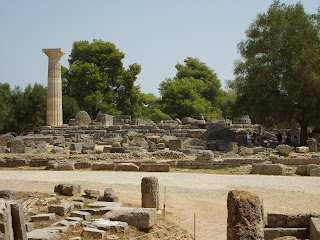 The home of the original Olympic games, Olympia is located in the north west of the Peloponnese, and was established in the valley created by the confluence of the Alpheois and Kladeos rivers. Despite its size, Olympia was not a town, but a sanctuary with buildings associated with the worship of gods and with the games themselves. Although established in 776BC the games continued until the last Olympiad in 393AD, and even survived a series of earthquakes in the 3rd century that inflicted heavy damage on the site. It was the Christian Roman Emperor, Theodosius I that banned the Olympiad and all games ceased during his rule. Olympia was still used as a sanctuary after that but was abandoned in the 6th century when it was rapidly buried under approximately 4 to 6 metres of sediments. It was rediscovered in the 18th century and up until relatively recently it was thought that the site was destroyed by high-energy catastrophic floods. However, new evidence, including the presence of marine shells indicates that this was more likely a tsunami impact, and that the cult site was destroyed by tsunami rather than fluvial processes. 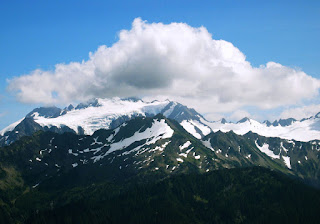 Mount Olympus is the highest mountain in Greece and is located in the Olympus Range on the border between Thessaly and Macedonia. It has 52 peaks and a number of deep gorges that in Greek mythology are thought to be the home of the Twelve Olympia gods of the ancient Greek world. The Olympus range is made up metamorphosed and deformed limestones from the Triassic and Cretaceous to Palaeogene. During the Eocene period, these were tectonically overridden by a series of much older basement gneisses, granites and metamorphic rocks. During the Neogene, uplift caused the Olympus limestones to be exposed in a type of 'window', with the overriding older rocks now seen as a concentric arrangement on the flanks of the Olympus Range. However, it is the deep valleys, formed during the Pleistocene to Holocene that are perhaps of most interest. Their morphology indicates a complex and repeated history of glaciation, tectonic uplift and rapid fluvial erosion and are definitely befitting of their status as the home of the gods of ancient Greece. 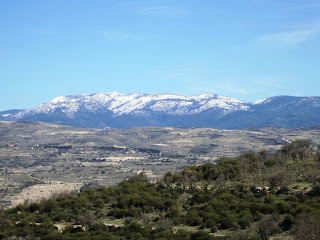 Mount Olympus in Cyprus is at the very heart of the Troodos mountain range. The range is dome-shaped with Mount Olympus being its highest point at 1952m. Troodos is what is known as an ophiolite, a name used to describe a distinct group of rocks that make up the oceanic crust and the underlying upper mantle, that have been uplifted and are now exposed. The Troodos ophiolite is world-famous and one of the most studied due to its complete lithological sequence, its structural integrity, its excellent exposure and its ease of access. The complete sequence of an ophiolite is complex, but very generally there are five distinct layers; the oldest is peridotite, followed by gabbro, and then sheeted dykes,  before pillow lavas, and finally sediments that accumulated on the sea floor all of which can be seen at Troodos. 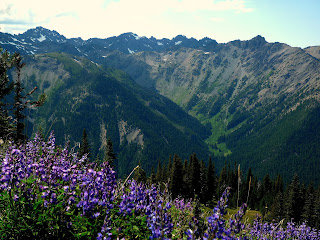 Olympic National Park is located on the Olympic Peninsula in the state of Washington on the rugged Pacific coastline of the USA. The focal point for the National Park is the Olympic Mountains part of a series of mountain ranges along the west coast of North America called the Coast Ranges. Made up of Neogene oceanic sedimentary rocks and submarine basalt formations, the Coast Range is a belt of uplifted land that formed as a result of plate convergence. Approximately 400km to the west, in the Pacific Ocean lies the spreading centre, similar to the Mid Atlantic Ridge, that separates the Pacific plate and the Juan de Fuca plate that is being pushed beneath the North American plate (known as the Cascadia Subduction Zone). The mountains themselves are made up of the sediments that are being scraped off the top of the Juan de Fuca plate as it is being pushed beneath the North American plate, known as an accretionary wedge. 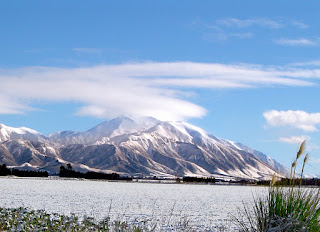 Located on New Zealand's South Island, Mount Olympus is perhaps best known as a ski area. It is part of the Craigieburn Mountain Range which in turn is part of the Southern Alps. New Zealand lies at the edge of both the Australian and Pacific plates. At North Island the Pacific plate is moving towards and being pushed under the Australian plate, and at South Island whilst they are still moving towards each other, the Australian plate is being pushed under the Pacific plate. This active tectonic setting means that much of New Zealand lies within a seismic zone and therefore subject to earthquakes. The Craigieburn Mountain Range has been studied due to its history of rock avalanches, triggered by large earthquakes at least 7 of which have occurred in the area in the last 6000 years. 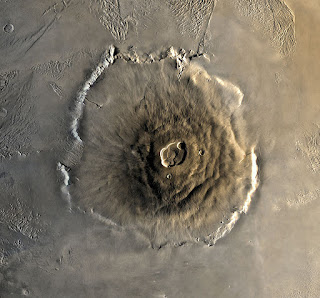 So we've cheated a bit with this one and have included a site that isn't even on Earth, but at a height of 25km, nearly three times as tall as Mount Everest, we couldn't leave this one out. Olympus Mons is the largest volcano in the solar system and is a really good example of a shield volcano. This type of volcano forms from very fluid magma and is so named due to its large size and low profile, thought to be like a warrior's shield. The size of Olympus Mons has been debated and it is proposed that it is so large because the lack of plate tectonics on Mars meant that rising magma erupted on the same part of the planet over a very long period of time. Olympus Mons is just one of a number of volcanoes on Mars and it is thought that volcanic activity ceased due to eventual cooling of Mars' core.