Week 1: Confessions of a Newbie Drill Coordinator ... by Jez Everest

Right. Let's get this straight from the off. I've never done anything like this before. I've worked for BGS for 13 years, and pretty much the entire time I've been cold. In cold countries, doing cold fieldwork, walking up cold mountains and glaciers in the rain, wind and snow. The one time I've been offshore in Antarctica, it was to take me to cold mountains and glaciers to work in the cold.

You get the idea? I do 'cold' stuff. So where I'm going now is something of a change.

Next up, in the 21 years since I graduated, I've only ever really done 'icy research'. Mostly walking around aforementioned cold mountains and glaciers, drawing maps, installing instruments, and coming up with daft ideas about how glaciers work. 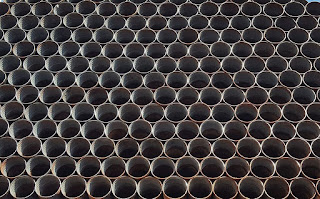 So not much experience of drilling holes in the seabed, 20 miles off the coast of Mexico. In the heat.

No. None of that.

So here I am, sat in a hotel in Houston, waiting for my connecting flight to Merida in Mexico this afternoon, thinking "what the hell am I doing?". This is going to be my first proper job within my new home in the BGS Marine Team, and I have a feeling it's in at the deep end. My job is to be a Drilling Coordinator, from what I can gather a liaison between the team of drillers and the scientists onboard our little drilling rig... Which is actually a boat... On legs.

And what are we doing? Well drilling into the Chicxulub Impact Crater of course, the one that killed the dinosaurs and changed life on this planet. It's got a lot of media attention already, and the boat isn't even in position yet. It's high profile, well funded, and staffed with some of the best scientists in their fields on Earth.

So no pressure then.

So Merida in Yucatan, Mexico was awesome. Hot, but awesome. I got to spend an extra day there, as the L/B Myrtle, our self-lifting platform was delayed due to choppy seas- more anon. Over the 36 hours we were in Merida the whole team arrived at the hotel on the outskirts of town, and you could tell as the hours ticked by, the restlessness to get on with the job was growing.

The time wasn't wasted. Last minute coordination meant Dave Smith, head of ESO (Science Operators) on the project and Chris Delahunty, head of DES/ DOSECC (the drillers) spent most of their time in contact with Mexican Customs, Port Authority and the boat. Probably for the last time I was able to go to the gym (big cycle sportive ride the week I get home), and explore the town a wee bit. Lots of prawns, the odd cold drink and a bit of sightseeing.

Yesterday (I think it was Tuesday) we finally got the ‘go’ to board the boat, as she drew up alongside the 7km long pier at Progreso at lunchtime. A few hours in the afternoon spent starting the long process of mobilisation- unpacking stuff, connecting stuff, shifting stuff, wondering where some stuff was.. basically getting started, and then dinner- lots and tasty thanks to Tim the cook- then more shifting, sorting and connecting.

The Myrtle is probably the weirdest looking boat I’ve ever seen. She’s roughly square, covered in ESO shipping containers, pipes, core barrels, a drill rig… plus she’s got three mahussive legs sticking up. And I do mean huge. You look at her and think “there is no way that boat can stay upright”. Apparently she does (everything is crossed right now by the way), though she’s not quick (6kts) and has about a metre of freeboard, so anything over what I would call ‘fun’ waves for windsurfing, and she’s swamped. Hence if the weather gets even a bit rough, she pops her legs on the bottom, and sits tight till everything calms down.

This afternoon we’re finally underway. I’m writing this halfway to the site where the Myrtle drops her 245 foot long legs to the sea bed and starts to jack the boat up out of the water, to form our stable drilling platform. I’m guessing once we get there, I won’t have much time to write, so I’m getting it done now.

Oh. And did I mention it’s hot?

Wrrrrrrrrrrrrr…. And I’m awake. Just. Fortunately I don’t sleep much anyway, but neither do I normally work until midnight, so my normal waking up time of 4am (which has thankfully shifted to 5-6am) may prove a bit early as I get used to shift work.

I'm doing the ‘Day Shift’, starting at midday and finishing at midnight. Graham is my opposite number on the Night Shift (cue The Commodores…), and so we have a half hour chat at the end of each. Mainly boils down to me explaining all the mistakes I've made, that he needs to be aware of.

Actually so far (hah!) there’s only been one bit of confusion. Both I and the drillers had the same numbers, it was just I couldn't quite work out how I’d got to mine. All fine, just too much for my small brain to cope with. 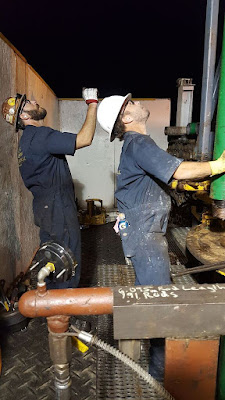 So Science news- we've started drilling! Yay! Currently we've only got to 15m, as we need to case the hole (line it with a steel tube) and fit an inner tube and cement that in. This is to guide the rest of the drill string (see? I’m getting the lingo!) hopefully all the way down to our target depth of 1500m. Getting the casing in was an immense task. If you can imagine the boat is 10m above the water, the waves are about 1-2m high, and the casing is being lowered down to the sea bed by crane. So it’s wobbly at the top. As soon as the case hits the water, it becomes very wobbly at the bottom too. So your case in the water is being wobbled one way, and the one you want to attach to the top is wobbling another way. In the middle there are 2 huge blokes, Will and Rich, who are lining the two casings up, each weighing several tons by the way (the casings, not the blokes... though they're not far off), and then threading them on using enormous chain wrenches, the biggest spanners I have ever seen and quite a lot of effort. Funnily enough Will reckons he eats about 10,000 calories a day. I’ve seen his dinners (3 every day). His estimate is about right.

So that’s all done, and we look set to start drilling again this afternoon at about 3pm. This is when I actually do my job. As an ESO representative my role is to talk to the drillers, see what depth they’re at, how fast they’re drilling, how much pipe is going down the hole; then talk to the ‘mud guys’ who produce the drilling mud to lubricate the drill, find out the mix, the viscosity, if that needs changing; sample the cuttings coming up from the drill and sieve and bottle them to hand over to the Core Curators; communicate all of this back to the ESO team, making sure everyone is happy with progress, or if changes need to be made; and talk to the scientists, keeping everyone in the loop as to what is going on at any time.

As it’s all new to me I’m running round chasing my own tail at the moment- thankfully there are understanding ears out there, who clearly take pity on a poor numpty glacial scientist who’s pretending to know what he’s doing in the middle of the ocean on a drilling rig.

Let’s see if I survive my shift, and I’ll let you know.