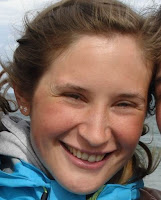 G’day everyone, I just started the second year of my PhD researching the environmental and climatic development of the Sea of Japan/ East Sea during the last ~1 Million years. Besides the laboratory work (see my first blog), an increasing amount of time is now being spend on reading, writing and thinking about the laboratory results I have obtained so far. I am also spending time practising presenting results to a whole range of audiences from the public to my academic peers through written work (manuscripts, blogs - like this one) and by partaking in scientific conferences. Conferences can be exhausting because you have to prepare a presentation (usually for around 15 minutes, which seems so long when you have to speak in front of an audience!), practise it and deal with the stage fright, but conferences are also great opportunities for getting to know researchers in the field and meeting fellow PhD students. Last but not least, conferences are a way to see more of the world; my most recent conference took me all the way around the world to Australia.

The samples that I am researching for my PhD are provided by the Integrated Ocean Drilling Program (IODP), specifically from their Expedition 346. After each of the IODP expeditions so called “post-cruise meeting” follows. These conferences can only be attended by the shipboard-scientists (i.e. the expedition participants) and shore-based researchers working on sample material from that expedition. The scientists then present their findings, discuss interpretation ideas and form collaborations to write on scientific publications. The post-cruise meeting of IODP Expedition 346 took place in January 2016 in Melbourne, Australia; how ace is that! This meeting was probably the most important conference during my PhD and I was glad to present my results and ideas to a friendly, very well-informed and enthusiastic audience. Some of the scientists that were there I have been in contact since the start of my PhD (but never met) and they gave extremely valuable advice; so it was nice to meet them in person and to show them the outcome of their support.

Following the meeting there was a three day field-trip, guiding us through the geological history of the last ~100 Million years in Southeast Australia, which took us along parts of the famous Great Ocean Road. The outcrops were located in pull-apart basins which were formed during the break-up of the supercontinent Gondwana and the subsequent drift of Antarctica away from Australia’s southern margin. Hence, marine sediments, material that was deposited on land and volcanic rocks could be observed. As most of the outcrops were located at the beaches, we needed to start at 7 am every morning to make sure we would make it before the tide came in and made a safe passage impossible. Maybe not the tide but at least the weather was on our side, with plenty of sunshine providing the chance for the occasional dip in the Southern Ocean. Overall the field-trip was another opportunity for socialising and discussing collaborations and publications.

I would like to thank UK IODP for their kind financial contributions without which I could not have attended this meeting.

My supervisors for the project are Dr Andy Henderson and Prof Tom Wagner (Newcastle University) and Prof Melanie Leng (BGS).