A new PhD researching the effects of variation in the orbit of the Earth around the sun...by Savannah Worne 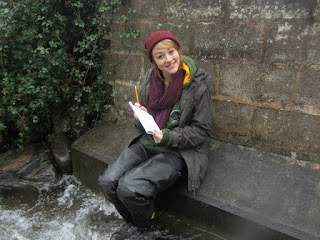 Hello, my name is Savannah and I have just started my PhD within the Centre for Environmental Geochemistry, between the University of Nottingham School of Geography and the BGS.  I recently graduated from the university with a BSc Geography, completing my dissertation research using the sediments to investigate environmental change over the last hundred years in Maloe More, Lake Baikal, Siberia. From my studies, I became very interested in palaeoenvironmental change and was keen to pursue a career in research, leading me to apply for this PhD.

The topic of my PhD is to investigate the role of Bering Sea oceanographic controls on the shift in Milankovitch orbital cycle dominance, during the Mid-Pleistocene Transition (MPT), which occurred between 1.2 and 0.7 million years ago. The Milankovitch orbital cycles occur due to gravitational interactions which cause variations in the Earth’s orbit of the Sun, and hence produce changes in the amount of solar energy the Earth receives and impacting on the climate. There are three dominant cycles called precession, obliquity and eccentricity, which cause changes on timescales of 26,000, 41,000 and 100,000 years, respectively (see here for further details). During the MPT there was a shift in the dominance of these cycles, switching from the formerly prevailing obliquity orbital cycle, to the lower frequency eccentricity cycle. However there was no significant change in the external orbital forcing; this implies that there must have been an internal forcing within the Earth’s climate system, which caused this system response instead.

To investigate this, I will be looking at sediments collected during an Integrated Ocean Drilling Program (IODP) cruise, taken from the continental shelf in the Bering Sea. I aim to use the microfossil assemblages of siliceous algae called diatoms, which sink to the ocean floor forming a preserved fossil record in the sediment, which can then inform us about the type of environment at the time of deposition. I will also be undertaking geochemical analysis to measure the chemical structure of a preserved micro-organism called foraminifera, as well as assessing the composition of the sediment itself (e.g. carbon and nitrogen content), to aid my diatom analysis in better understanding the changing environment through the MPT. One final proxy I plan to utilise is the ice-rafted debris (IRD) record; IRD is sediment derived from the land or seabed which is transported in a matrix of ice (e.g. sea-ice or icebergs), which then floats away from the adjacent land mass or ice sheet, melts, and is subsequently deposited in the sediment at the ocean floor. As my sediment core has been taken from near the historic coastline and the maximum winter sea ice extent, this record should prove useful to assess the magnitude of sea ice formation and hence infer climatic conditions such as temperature and wind strength.  Through these proxies, I hope to uncover the history of Bering Sea sea-ice, sea surface temperature, productivity and salinity through the middle Pleistocene, as well as assessing potential teleconnections with North Atlantic Ice Sheet growth and instability, through this period.

Currently, I am spending my time becoming familiar with the previous body of work completed in the Bering Sea and more broadly through this time period, to better understand how my PhD research will fit into this. I have also started to undertake my first batch of laboratory work, processing samples to pick out benthic (sea-floor dwelling) foraminifera which will later be used for isotopic analysis, to create a robust age model for my sediment core, U1343.