Some of the people that see the greatest amount of rocks are hill walkers, who spend their spare time exploring and enjoying our great outdoors. Many hill walkers have a practical understanding of the ground beneath their feet, and many of them are geologists themselves. But quite often, those that aren't, want to know more and that is where Mountaineering Ireland came up with an idea to address this.

Late last year, Mountaineering Ireland approached the Geological Survey of Northern Ireland and the University of Ulster to see if they would produce a simple geological map for the north of the island of Ireland. The idea being to help hill walkers, and anyone else using the outdoors for recreational purposes, to understand the rocks and natural landscape that they are using. The map, called From Rocks to Ridges, uses a digital terraine model (DTM) that shows the topography in 3D over which is draped a simple bedrock geology map. On the back of the map is a general description of the geology that helps provide an understanding of how the main rock types formed. Of course, it's not just the solid bedrock that we see but the superficial deposits that provide a thin veneer on top so in addition to providing information on the general geology, a description of the main superficial deposits and the features that result is also given.

But producing a map is one thing, checking how it functions in the field is another altogether. So on one of the wettest and windiest days in November a handful of us from GSNI together with two members of Mountaineering Ireland decided to test it in the Mourne Mountains, in Co. Down.

The day got off to a 'good' start when Alex Donald, Information Officer with GSNI tried to test our new Unmanned Aerial Vehicle (UAV), otherwise known as a drone. Even in the car park at relatively low levels the UAV would have been simply blown away so we had to shelve that idea for another day.

Chief Geologist for NI, Dr Mark Cooper began by giving us an overview of the map and then we set off. Starting off at Meelmore Lodge with its stunning glacial features, we were treated to some interpretation by our Quaternary geologist, Dr Sam Roberson. We made our way up the track and lunched at an old granite quarry on what was apparently the calm side of the mountain. The high winds were only just beginning and our colleagues from MI started using the phrases 'a high level of grimness' and 'death zone'. But we are geologists in Northern Ireland and we could cope with this. As we continued upwards, on at least one occasion each of us managed to be blown over, with the smaller members of our group (me!) being blown over several times.

Onwards and upwards we went, into horizontal rain and increasingly poor visibility. For all of our expensive outdoor clothing, all of us were starting to think that it was time to invest in upgraded equipment. We reached the Mourne Wall, a 35km wall used to mark the perimeter of the water catchment area for NI Water, and more importantly a place for shelter as we crouched down out of the strong winds. At this point we should have been getting spectacular views of the rest of the stunning Mourne Mountains with their glacially carved granite peaks. All we could see was rain! The paths that we were walking on were simply rivers, but we did manage to stop to have a look at some tuffasite (veins within the granite that formed during explosive events) that was lying loose along the way.

We eventually began our descent and as we did so, the rain stopped and the cloud began to clear and we were able to catch glimpses of the glacial valley that we were walking down. We took shelter from the still very strong winds in an old quarrymen's hut. This time it was our colleagues from MI that were able to tell us about the granite quarrying heritage in the Mourne Mountains, something that has all but ceased.

As we reached the bottom of the valley, the rock type changed and this time it was Silurian metasediments. These were the original country rocks that the granite would have been intruded into about 55 million years ago. From a walkers point of view, these require a different approach altogether with their sharp edges and slippery surface. Although I can assure you, that falling on to the granite was no delight either, and I have the bruise on my shin to prove it. 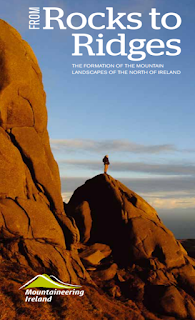 But what about the map? Well we brought it out on several occasions to see what the various rock types were. Despite it acting a bit like a sail in the wind, and the exceptionally heavy rain that it was subjected to, it faired very well. It has been printed on waterproof paper and fits easily into a leg pocket so it is designed to be used in the field. We were also told by our colleagues from Mountaineering Ireland that a number of schools have requested to use the map so it is definitely being put through its paces. I'd like to think that the conditions that we took it through were some of the roughest that it could possibly experience so if it survived that, then it can survive anything!

No geologists were harmed during the writing of this blog.
#GSNI Geological Survey of Northern Ireland hill walking Mountaineering Ireland Mourne Mountains Rocks to Ridges tuffisite University of Ulster walking