on September 04, 2015
Earlier this year I was fortunate enough to qualify as one of the  Global Geopark evaluation team. This role involves carrying out field assessments on behalf of UNESCO for new Global Geoparks and to revalidate the existing Global Geoparks, of which there are now over 100 across the world. All Global Geoparks undergo a rigorous application process that includes a field visit, but what sets them aside from other UNESCO labels, is that they also have to be revalidated every four years. This element of quality control is what makes Global Geoparks so appealing as this process ensures that they are of consistently high quality.

My first mission (this is the official term, I'm not trying to sound like a secret agent) was to be one of the two assessors to revalidate Geopark Araripe in Brazil, a challenge that I accepted willingly as you can imagine. I have spent a great deal of my career working with Global Geoparks, eight years of which were spent as Geopark Geologist for the Marble Arch Caves Global Geopark in Northern Ireland and the Republic of Ireland. Now was my opportunity to be on the other side of the fence; to be the assessor as opposed to be assessed!

For those of you that are not familiar with Brazilian geography, Geopark Araripe is located in the province of Ceara, about 500km south of the north-eastern coastal city of Fortaleza. The geology is predominantly sedimentary rocks of Jurassic and Lower Cretaceous age, most of which were part of the extensive Afro-Brazilian lake system that existed prior to the break up of the ancient continent of Gondwana (made up of most of today's Southern Hemisphere landmasses). Because of this, similar rocks and fossils can be found in Geopark Araripe and in Liberia, both on opposing sides of the southern Atlantic Ocean, evidence that they were
once joined together. 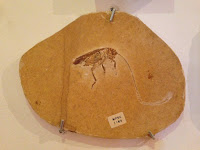 One of the most significant features of Geopark Araripe are the exceptional fossils found in the sedimentary rocks, not only in their variety, but also in their abundance and state of preservation. Some of the fossils found include insects, frogs, turtles, lizards, fish, plants, and even dinosaurs and pterosaurs. This dazzling array of fossils would impress even the most dismissive grumpy teenager.

But the geological significance of Geopark Araripe was not really what we were there to assess. After all, it was first declared a Global Geopark in 2006 when it's internationally important geology would have been assessed initially. Given the pace of geological time it was unlikely that much had changed since then. A number of other criteria had to be assessed including the contribution to the work of the Global Geoparks Network, management structure & financial status, geoconservation, strategic partnerships, marketing & promotion, and sustainable economic development.

So over a very intense three-day period, the management and staff of Geopark Araripe led us through a detailed itinerary to demonstrate that they still met the criteria to be called a Global Geopark. Geopark Araripe is managed by the Regional University of Cariri (URCA) so many students joined us on our visit, and were able to show us around a number of key geological sites. We were taken to museums, education centres, paleontological dig sites, tourism sites, information centres, geological trails, as well as witnessing much of the community integration that Geopark Araripe has undertaken. An inspection on behalf of UNESCO does not go unnoticed so we were greeted by numerous local dignitaries including mayors, community leaders and even by the local press, all of whom impressed upon us the significant positive impact that Geopark Araripe was having on the region.

Assessing a Global Geopark is not something to be taken lightly. Apart from the field evaluation there is a huge amount of work to be done beforehand and afterwards. Prior to the visit, each Global Geopark must send on a number of documents to the two assigned evaluators, including the original application as well as detailed information on what has been achieved since then. These are then studied and scrutinised and the field visit is then treated as a fact-finding mission, to confirm what has been stated as well as to identify any areas for further work. Once the mission is completed, the two assessors must compile a report for UNESCO. This gives recommendations as to whether the Global Geopark meets the required standard (known as a 'green card'), whether they are weak in certain areas (known as a 'yellow card') or in extreme circumstances, if they are completely failing to comply with the strict quality standards of Global Geoparks, their status will be removed (known as a 'red card').

It is important to stress that the assessors only give recommendations and do not make a final decision so if you want to find out how Geopark Araripe got on then you'll just have to wait!