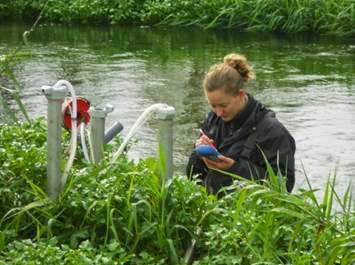 Many of us will not have heard of groundwater before, or if we have, we probably haven’t thought about it much – but not Rachel, for her groundwater is not just her job, it is a fascination. Rachel is a Project Hydrogeologist, which means her job involves looking at water quantity and quality in rocks underground. Her job is spread over many different projects, from examining how groundwater responds to weather extremes to helping with a massive nationwide survey of the methane levels in aquifers used for public water supply. This nationwide baseline study uses information on where aquifers overlie potential shale gas deposits and by collecting methane samples, data can then be used to protect groundwater in the future. So as much as we may take our water for granted, to Rachel it is a vitally important resource.

But it almost didn’t turn out this way for Rachel. At university she studied Environmental Science and loved working on (and in) rivers. “I always felt drawn to the watery side of Environmental Science” she told me, and spent some time volunteering for the BGS G-BASE project, a geochemical baseline study, which involved Rachel spending time in rivers, absolutely covered in mud! Around the same time, she remembers reading a New Scientist article (like this one) on the problems of water shortages in Africa and how engineers were drilling for water. “I remember thinking, it’s all kind of linked, you know – we’re drilling for water in the UK, they are drilling for water in Africa. It must be really important, as the problems are kind of the same; they are just in different places.” Because of her interest she decided to do the MSc inHydrogeology at Birmingham University, but unfortunately, at the time, maths wasn’t her strongest subject. When in the interview, she was asked a tricky maths question and quite honestly responded that she couldn’t answer it! She hadn’t done A-Level maths and the lecturers interviewing her said they liked her enthusiasm, but that she may struggle with the maths. Sitting in Birmingham station after the interview, Rachel told me she wasn’t sure what to do next. Now for many people, this would be about the time they gave up, but not Rachel. She got in touch with the some of the contacts she had made volunteering and secured a zero-hours contract working for the engineering firm Golder, who offered to pay for her to take an advanced maths course! After completing this and with a year of work experience under her belt, she could have just stayed at Golder, but Rachel was tenacious and re-applied to Birmingham. Because of her dedication, she not only got the place, but full funding for her course as well!

It wasn’t all plain sailing even after this, Rachel graduated at the onset of the recent recession and jobs were scarce, but her determination and drive won through over an unchallenging temping job and she got a job at the BGS. It is interesting that Rachel still remembers that article about drilling for water in Africa, as she has gone on to use her expertise to help people in some of the most challenging environments in the world. Speaking about recent trips to Zambia and Nepal she said “it can be both the worst and best part of my job; it’s tough seeing the situations that people live with - some people use horrible water, but at least we are trying to help, I feel that we are doing something to make it better.”

﻿
﻿﻿Rachel is not only passionate about helping others improve their groundwater, she also wants to protect it here in the UK and thinks that the public may be starting to agree with her. So many water (or groundwater related) stories are negative: flooding, drought and hosepipe bans immediately spring to mind. However, recent concern over contamination of groundwater is leading people to look at it differently – not as a problem, but something to be protected. She also wants people to move away from thinking of groundwater as ‘rivers underground’, that it is a lot more complicated and interesting than that. And with this hydrogeologist’s record of determination and achievement, I’m sure she will succeed!


For more information of what the Groundwater Team at the BGS does, watch this video.

Unknown said…
Great blog created by you. I read your blog, its best and useful information. You have done a grate work. Super blogging and keep it up posting
6:35 am, August 14, 2015