on July 10, 2014
﻿
Hi, I’m Hazel Gibson, a PhD researcher from Plymouth University, who is interested in what people think about geology and how that affects how we as geoscientists communicate it. For the last two weeks I have been up at the British Geological Survey speaking to the scientists about their work, what makes them passionate about it and why they think it’s important to us. The following is a series of short 'people posts' about the real faces behind the BGS.

As a child, Leanne Hughes spent many hours on long countryside walks with her family around the hills and dales of Derbyshire, which, as it turned out, was good practice for her future career as one of the British Geological Survey’s modern mappers. Leanne is a Survey Geologist, so her job is to map places in the UK that need new geological information, some of which have never been mapped before (who knew there were such places?!). In order to make the best and most up to date maps she uses cutting edge technology, including field computers, GPS and aerial photography. In two weeks Leanne usually maps a 78km2 (30 mile2) area, which is about the size of Coventry!! This is a pretty big job, with Leanne having to record all the important information that she can see, whilst contending with overgrown paths, reluctant farmers and forests that tell her GPS she is walking on Loch Ness. Not forgetting the great British weather of course, which can switch from zero degree rain to scorching sunshine within four days!  It’s lucky that she still likes walking the wilds of Britain – in fact she says “I like places like North Wales and the North West Highlands. People call them bleak, but to me that just means that they are not crowded with people!”

Leanne maps surface or superficial geology – this is all the rocks, soils and sediments that are on the surface (rather than the hard rocks that make up the bedrock underneath) and she is especially interested in glaciers. She recently told me that in drumlins (a hill sized, egg shaped landform left behind by glaciers), you can find examples of natural fracking! The pressure from the water at the bottom of the glacier whilst it is still in place is so strong that it forces water, mixed with sand, into the rocks beneath it. This breaks the rocks apart and props them open with sand grains the same way that drillers today do artificially. It is curious things like this that Leanne is interested in, but her work is also vitally important to all of us, even if we aren’t interested in glaciers!

In discovering new details about the type and location of superficial geology, Leanne helps flooding planners from the Environment Agency work out where floods may go in the future. This allows people to better understand the possible risks of flooding in their area. In order to help her understand more about floodplains Leanne uses a tool called an Abney level. This is a surveying instrument used to work out elevations in the field. It has a sighting tube and a moveable spirit level and Leanne uses it to work out if terraces are on the same level as each other or if they are more complicated. As a result of the cutting edge work that Leanne does, she was invited to give a talk on 21st Century Mapping at the Royal Institution in London, the home of the Christmas Lectures! 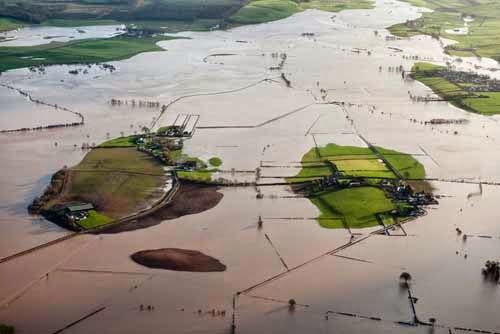 Leanne does a lot of work teaching young people about glaciers and geology. Her favourite demo involves freezing sand and pebbles into blocks of ice and scraping them across a painted board to show the marks that glaciers leave behind. She also created a build-your-own model of the volcano Eyjafjallajökull, which erupted in 2010, which ended up as a ‘make’ on Blue Peter! Despite this, Leanne didn’t get a Blue Peter badge. She is also about to get her first geological map published, of Derby (number 125).

Leanne is also interested in trying to answer big scientific questions and the one question she would really like to answer is ‘what happened to the last British Ice Sheet?’.  For the moment though, Leanne is occupied with continuing to map new uncharted territory both here and overseas. If you want to find her I suggest you head out to a remote part of our country and look for someone, mapping computer in hand, striding out across the landscape in search of new horizons.
BGS Leanne Hughes mapping people post