Journey into the Jurassic by Steve Thorpe

on October 25, 2013
Steve Thorpe, BGS driller and author of 'On the Bog' posts, tells all about the latest Drilling Team visit to deepest Wiltshire and their search for long lost Jurassic treasures......

There’s nothing more exciting than drilling core and finding fossils. It’s the question we get asked the most when we tell our friends and family what we’re doing. “Did you find gold/oil/fossils?” So this time when we ventured out we could say “Yes, actually we did!”. The Jurassic Oxford Clay is a dark grey laminated sequence of stiff mudstones with varying numbers and species of fossils which are relatively close to the surface in some places. This allows our shallow drilling rig the opportunity to demonstrate what we’re good at, and this week proved that this geology is ideal. 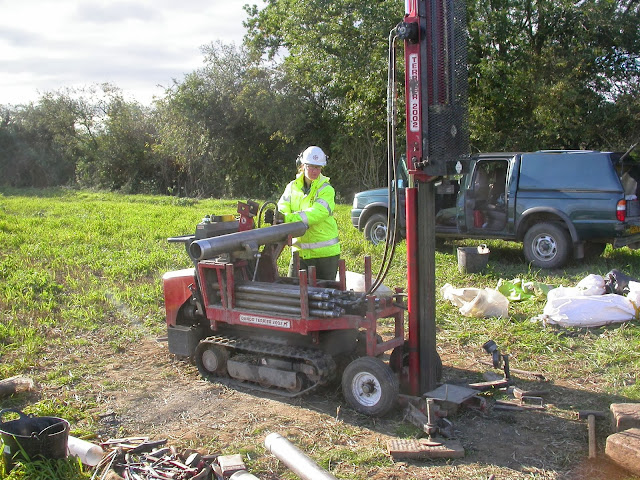 Two boreholes were drilled and the contents of the core proved the subtle variations in the lithologies of this particular part of the Oxford Clay. Of particular note were several beds of shells, mostly Dicroloma, Bositra, Meleagrinella and nuculacean bivalves, but with some interesting ammonite species too. The photo below shows a specimen of Kosmoceras that literally fell out of the drilling shoe when we brought it to the surface! 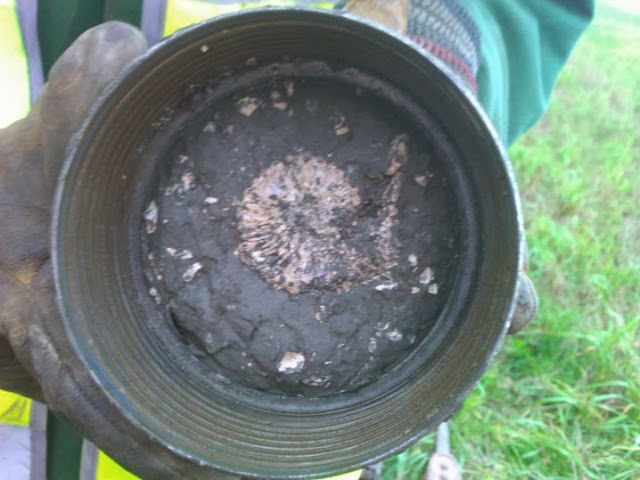 These wonderful fossils had been found previously when the railway was built around 150 years ago. But since then the location had become a mystery. In 2006 the BGS commenced a targeted drilling campaign to find the same location and succeeded. This followed with the site being the focus for an episode in the BBC Fossil Detectives series. The drilling objectives for this week were to provide some more core samples to allow further analysis of the environment and sedimentary characteristics at the time of deposition.

From a drilling point of view this was done fairly simply using our percussion drill rig, with 117mm barrel size being chosen to provide a good sample. The deeper we drilled the slower this became to the point where at 9m it was taking around 40 minutes to drill 1m of core. It also took lots of effort to pull it back out of the ground, and the deeper cores required our 20 ton pull-ram to be deployed! Heavy work indeed, but we had a great weeks drilling in a fascinating location.

Till next time, keep it greased!