on September 11, 2013
Our audience at the 2013 British Science Festival were treated to a Landslide fact bonanza today. BGS Dr Helen Reeves and TRL Dr Mike Winters teamed up to present findings from the cutting edge of landslide research...... As well as the world premier (!!!) of the new Landslide Response Team video! See it here http://youtu.be/VZgfZbVLB7U 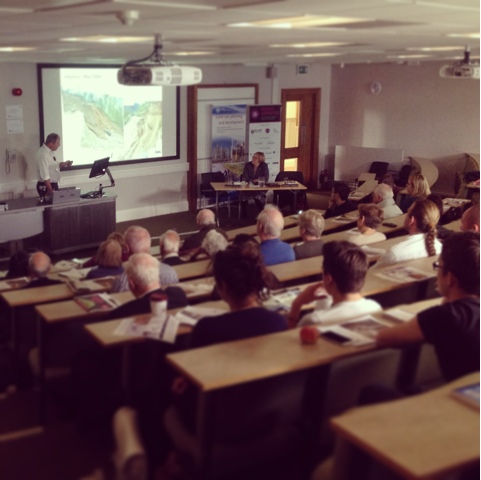 Mike presenting
Before we get onto the jaw dropping numbers it's worth noting, as we're using the medium of online communication, the value that social media has had on the research.
The team has always used traditional media to find locations of recent landslides so they can be visited, logged and studied. Every case study adds to understanding how and why landslides happened in the areas and at the times they do. With the launch of the Landslides hub on the BGS website it became possible to encourage Citizen Scientists to report events and over the last 12 months the team has been monitoring Twitter too. This resource allows the team to see events unfold in real time and get minute by minute reports and data. So if you see a landslide then visit http://bgs.ac.uk/landslides or tweet http://twitter.com/bgslandslides
So back to the all important numbers. Over the last 14 months there has been a staggering fivefold increase in UK landslides with 75 occurring in December alone. Since January 2013 there's already been 95 events which is more than recorded for a 'normal' year. So why has it been such an  exceptionally  above average year for landslides? Simply put it's been an above average year! Well it's all to do with the weather. Remember how the 2012 summer was VERY WET! In fact the MET office recently announced it was the second wettest UK summer in recorded history.
Helen confirmed that it's this rainfall that has a direct effect on landslides. Yes, the higher the rainfall the more landslides we see, for the  science bit see the website...... http://www.bgs.ac.uk/science/landUseAndDevelopment/landslides/November2012.html
40% of these landslides happen immediately after heavy rainfall events and are typically shallow events affecting the top 1-2m of soil and rock. 60% happen upto 2 months after the rain event and are deeper landslides, 10's of metres deep, because thats how long it takes to reach a  layer of rock susceptible to movement.
When we're back from the festival we'll follow up with a blog from Helen about the uses of this data including the Landslide Susceptibility Maps...... the big plans for the future of landslide research and how we're using our academic and comercial collaborations to protect infrastructure and human life in the future.
Signing off from the British Science Festival, this is Lauren Noakes from the BGS
British Science Festival Helen reeves landslides lauren